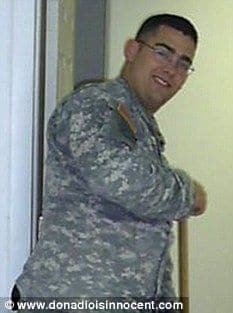 Here’s a story that should have you wondering about one individual’s inability to deal with anger and the things that young boys accidentally do.

dailymail.co.uk:A former soldier brutally beat his girlfriend’s eight-year-old son into a coma because he accidentally deleted a game on his Xbox.

Rocky Donadio, a father-of-two, stomped on the boy’s stomach so hard he permanently damaged his internal organs. The boy will have to be fed through a tube for the rest of his life.

But if you think that’s crazy, then comes the online petition: ‘Donald is innocent’ by Donadio’s sister  and former platoon sergeant who somehow have adopted the point of view the young boy was asking for it.

They describe him as a keen angler, who is ‘patient, affectionate, and nurturing to his children as well as to the children to whom he has been a father figure for the past year.’

So affectionate it seems, that Donadio spend the greater part of 5 months changing his story while the boy lay in a coma, from minor accident, to a ‘wrestle’ match that got out of hand only to be exposed after detectives inabilities to make sense of the extent of the injuries with Donadio’s story until the boy finally woke up from his coma and explained in detail what had happened.

But when the boy woke up from his coma, he told police Donadio had repeatedly stomped on him and beaten him as punishment for his mistake.

For his part, Donadio was sentenced to a 75 year jail sentence for child abuse whilst the young boy will spend his entire life forced to eat out of a tube. Which begs the greater question, how did a former soldier take a situation like this out of context and turn a domestic situation into a war like situation? Is it really that hard to break out of mortally attacking other human beings once trained to be a killer or is there something on a deeper level eating Rocky Donadio?