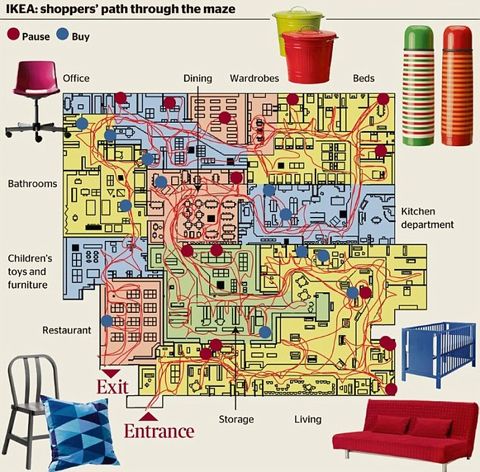 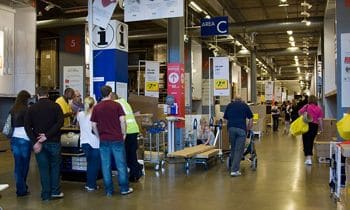 IKEA stores may be intentionally designed as hyper-real labyrinths in order to induce customer confusion while simultaneously maximizing in-store time, says ProfessorAlan Penn — director of the Virtual Reality Centre for the Built Environment at University College London, and expert in store design.

Penn’s sexual and violent reading of IKEA (a standard for academia) suggests that customers – who agree to submit to the store owner by the act of entering the store – are ripped out of reality, and plunged into the sadomasochistic fantasy of entering an endless and inescapable IKEA catalogue wherein they are subjected to something like “shopping as power exchange.”

Daily Mail: “Here the trick is that because the lay-out is so confusing you know you won’t be able to go back and get it later, so you pop it in your trolley as you go past.”

This, Penn argues, “frees you from the weight of all the personal cultural stuff that we invest in objects, these are just commodities.” Making shopping in IKEA the commercial equivalent of agreeing to a day of drunken and delirious promiscuous sex. Or, shopping purely for the pleasure of purchasing  without any regard or emotional attachment to the item being purchased.

All of which proves, by peer review, that Swedish Minimalism is indeed, as Penn suggests “a psychological weapon” of mass production fashioned specifically to, you guessed it, “part shoppers from their cash” – the ultimate act of pleasurable postmodern violence.

No wonder, considering that, as The Consumerist noted earlier this month, shopping activates “the part of the brain usually associated with fear and rage, which are pretty much the two main emotions advertisers try to trigger in consumers.”

But wouldn’t this mean that the more one angers and frightens his consumers the more successful and enjoyable it will make his brand? And is not the logical extension of this trend, should it become one, outright terrorism by corporations as they assimilate the tactics most often used by religions?

Just look at the Android vs. iPhone debate, which is already taking on the metaphors of all out war in the name of a particular favored brand.