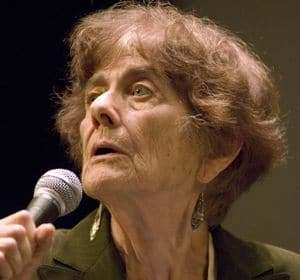 Isn’t it time you took someone out for idealogical reasons too?

Just when you think the nation is beginning to look for solace and reason, especially in lieu of the recent shooting in Arizona directed at Gabriella Gifford and her entourage comes the disturbing news that fans of right wing media zealot Glenn Beck have begun issuing the intellectual thinker/academic Frances Fox Piven death threats. Why you wonder? Let’s look for our collective hatchet and follow this way.

nytimes : Frances Fox Piven, a City University of New York professor, has been a primary character in Mr. Beck’s warnings about a progressive take-down of America. Ms. Piven, Mr. Beck says, is responsible for a plan to “intentionally collapse our economic system.”

Which is code word for watch out kids- we have another left wing loony here who wants to jeopardize your liberties and have you give up everything that is rightfully yours. To the battlefields.

Her name has become a kind of shorthand for “enemy” on Mr. Beck’s Fox News Channel program, which is watched by more than 2 million people, and on one of his Web sites, The Blaze. This week, Mr. Beck suggested on television that she was an enemy of the Constitution.

And if you can suggest it, you might as well wear it…

Never mind that Ms. Piven’s radical plan to help poor people was published 45 years ago, when Mr. Beck was a toddler. Anonymous visitors to his Web site have called for her death, and some, she said, have contacted her directly via e-mail.

So if Ms Pivens work was first published 45 years ago why is it that it now drawing so much hostility from the right wing community and more importantly what is it about the idea of redistribution of income that alienates so many Americans, even those same Americans that would probably stand to benefit if the cost of housing, education and medicine were subsidized? Do we really as a nation despise giving away part of our wealth to others who we feel ought not to have it and go out and make it for themselves?

In response, a liberal nonprofit group, the Center for Constitutional Rights, wrote to the chairman of Fox News, Roger Ailes, on Thursday to ask him to put a stop to Mr. Beck’s “false accusations” about Ms. Piven.

Joel Cheatwood, a senior vice president, said Friday that Mr. Beck would not be ordered to stop talking about Ms. Piven on television.

Because it is a free country after all, never mind if my or your rights are violated by the vitriol that is ignited by inflammatory comments. But then can one really blame Mr Beck or Fox, his patron for the way fans of his dogma react? After all, as a journalist, even a tenuous one at that, Mr Beck should still be allowed to express a point of view even if it is one that one opposes. But what if by expressing that point of view a certain violence, or threat of is perpetuated? Shouldn’t Mr Beck be asked to hold back or at the very least re phrase his ideas?

‘The Glenn Beck Program,’ probably above and beyond any on television, has denounced violence repeatedly,” Mr. Cheatwood said.

Has it really? Why then do fans of Mr Beck’s continue to personally harass Ms Piven, whom too is also free to express a point of view if she chooses? Even an opinion that has been publicly known for 45 years?

By given weight to the idea that disenfranchised citizens, especially those unemployed ought to take to the streets like they have done so in Europe Ms Pivens ideas have been construed as inflaming violence. Which raises another question- by taking to the streets and exercising ones rights to protest and congregate is that within itself a form of violence as Mr Beck suggests?

“There is a kind of rhetorical trick that is always used to denounce movements of ordinary people, and that is to imply that the massing of people itself is violent.”

That, she said, is what Mr. Beck is doing, trying to frighten his viewers.

And yet Mr Beck argues otherwise and has argued her writings incite a type of collateral damage to our nation. Should we believe Mr Beck or wonder if he is trying to play on people’s economic insecurity? In the meantime there are hundreds of people boiling with as Ms Piven notes with rage and vitriol towards her. Which brings up another question- should one of those fans harm Ms Piven, will Mr Beck have blood on his hands? Does that make for credible journalism? Or are journalists, which includes Mr Beck (as tenuous as that term may be in his case) absolved of actions pursuant to people reacting to pieces they have written?