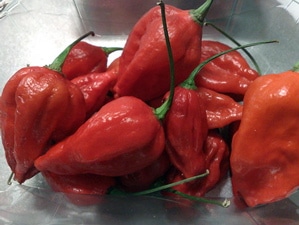 Now able to strip paint off…

Like you we like our food a tad on the spicy side, but in the event you are looking for a euphoric experience can we suggest the Naga Viper Chili pepper for an extra hearty kick?

NY Daily News: The Naga Viper, a cross between three of the hottest exiting varieties, is set to become the hottest chili in the world.It’s so hot that it can strip paint. And weapons experts are even considering using the chili in a “spice bomb” to incapacitate enemy soldiers.

But why bother incapacitating enemy soldiers when you could be incapacitating and giving yourself an endorphin high by kicking a few Naga Viper Chili’s in your next food outing?

The new species was created by Gerald Fowler, who runs the Chili Pepper Company in Cumbria, a small county in England.

“It numbs your tongue, then burns all the way down,” he told the newspaper. “It can last an hour, and you just don’t want to talk to anyone or do anything.”

Mmh, are you reaching for the chili pepper right now, slicing it up in delicate parts so you too can spend the rest of the afternoon pleasantly speechless and of course numb?

The tongue-scorching pepper set a world-record on the Scoville scale, which measures the heat in spicy food.

Inclined to try it right now? Well eating this yummy morsel comes with a waiver, just in case things don’t work out for the way you imagine it…

Fowler maintains eating the fiery pepper is good for you.  But how many things that are good for you come with a waiver?

He makes customers sign an agreement they’re “of sound body and mind” before sampling a Naga Viper-based curry.

“It’s a marvelous endorphin rush,” he said. “It makes you feel great.”

Will be sure to try ours out one day with a bottle of bourbon on the side, just to wash down the thrill and help in the numbing process.