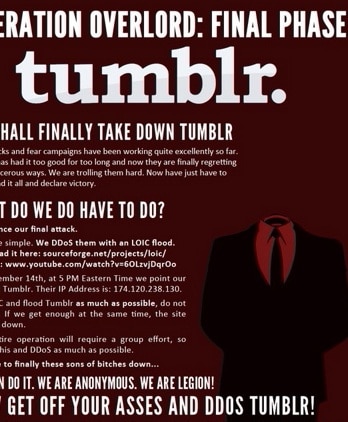 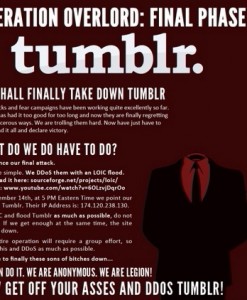 All the interweb stands at ready for the 5pm battle between last culturally relevant community of self-styled hackers reveling in their self-perceived flanerie and their growing, but infertile, offspring — the corporate test-tube hybrid we call microbloggers — as the anonymous legion of the image-board 4chan (perhaps for the last time) slathers itself in shit, blood, and war paint to prepare for what may well be a suicide attack on its nemesis, Tumblr, an image-based microblogging platform, enacting the final phase of what has been dubbed, with the D-Day allusion, “Operation Overlord.”

While most have commented cursorily on the nature of the campaign at hand, glancing over the similarities between /b/ and Tumblr – both image based [anti-]social platforms frequented by bored teenagers, one obsessed with kittens dressed as hipsters and the other with gore porn — no one, at least yet, has bothered to address the deeper issues at stake in this battle to end all battles on the web. For, far from similar competitors, Tumblr is /b/’s web 2.0 replacement, image posting done not to waste time and create terror, but to continually create cutesy content for a company. Tumblr, it could be said, is /b/ corporatized and sterilized, /b/ without the balls.

Battle lines have been typed up and badly photo shopped, defenses have been wrought, as we are to witness a death match between web 1.0 and its vicious anonymity and web 2.0s equally vicious, but highly regulated corporate sponsorship, a struggle quite literally for ‘freedom,’ the right to privacy, anonymity, an online way of life.

The plan is as follows: as preempted by 4chan… 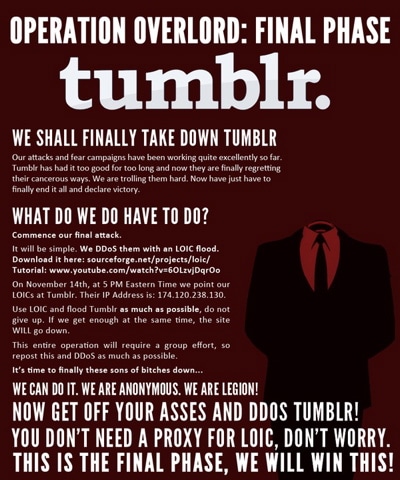 But more than just another ‘raid,’ this is a very real, if online, war between two clashing cultures that will determine whether anyone really has the ‘right’ to the kind of flanerie (deviant idleness) espoused by 4chan, and what is only perceived to be flanerie, or deviant idleness: that of Tumbler – that is, deviant idleness always collected, archived, and used to make money by its corporate sponsor.

If this really is a symbolic battle, and not just something ripe to be sensationalized by bloggers as ‘epic’ (the net’s most overused adjective) it is a symbolic battle that 4chan has already lost, an unstoppable public suicide attack made only as a statement, a self-organizing system merely going through the final motions and bringing about its own always self-indulgent auto-destruction, as Tumblr’s own Operation Overkitten has already created an impenetrable defense system.