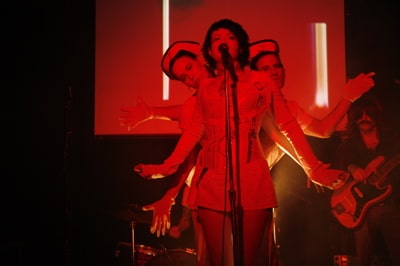 At Crash Mansion this Friday, New York’s favorite schizophrenic Glam-rock opera comes back pared down to its dark and tender-hearted bones.

I know you cool kids everywhere love to think that pill-popping, fast-living, boob-flashing, starfucking decadence was your very own invention just about a year back, along with wearing delusions of grandeur right under your fake eyelashes and the eager propensity to white-jacketing yourselves into desperate mayhem and prompt oblivion. Not quite so.

Zelda Zardoz did it a lot better, with all of her incandescent spirit and with grander panache, all before you were born.

Zelda’s story is the heart of Smith Island Asylum’s intense post-psychedelic mixed-media rock opera sensation. She once was just like you, a gorgeous young girl with a bitter childhood and a head full of dreams: fame and fortune, glamour and opulence, flashes and courtships – or Hollywood would do too. It was the early seventies and California already had more than one go at crushing idealism in such delicate creatures. The onslaught of crazed attempts and broken dreams began.

White light, Asylum, Uncle Dick, Starfucking your way to Nowhere, In my Room, Killer, The Rape, Dickey the fly, Iranian Party, White Jacket, Coma. Song after song, Zelda fashes forward and back to distrastrous childhood scenes and infamous adult ventures, from drug-fueled joyfests to starkly naked awakenings as the Demi-God of Shortcuts, Sex, Drugs and Rock’n’Roll, along with all his dark-winged wicked angels, chip away at her heart, life and sanity.

The show is an homage to 70’s Glam Rock sound, to Bowie and T.Rex showmanship, to Queen epic rock grandeur, to Blondie’s sky-rocketing eeriness, to Iron Maiden’s ability to wreck havoc inside your own plexus. Dizzying film montages of an unexpected quality don’t leave you on the edge of Zelda’s mayhem, they take you right inside of it. That’s the show. That’s the show we Manhattanites have been missing for the last six months. But it’s not what seems to await us on the exceptional presentation this Friday. 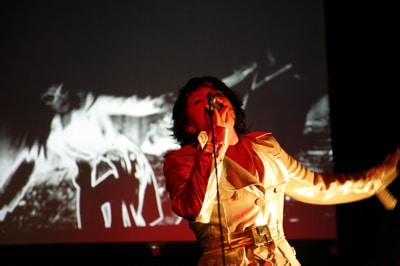