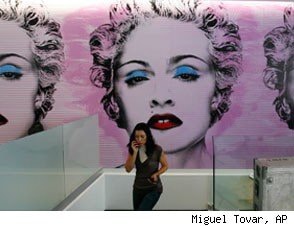 Boasting blown up pictures of her own ego image stylized to look like Warhol prints and going by the name Hard Candy, the gym  which attracted Paul Oakenfeld to DJ its red carpet opening   is requesting rates that are, even by Manhattan standards, a wee-bit pricey: $160 a month after an $830 sign-up fee.

Together that’s about one-ninth of the average per-capita GDP ($9,100 nominally).

But according to the material girl, it’s worth it for the glitz and glam. After all, the name is the perfect combination of ‘hard body’ and ‘eye candy.’ And as she continued in a statement: “It’s a sexy name that gives you the opportunity to have fun and to build strength as far as the imagination will allow.” Not to mention it’ll make a welcome respite from the usual exercise of dodging gunfire and running from kidnappers (at least in the border cities).

That Hard Candy will surely be hip place to be seen by all the country’s coolest cocaine dealers who have a penchant for railing lines to Like a Virgin while they’re busy beheading journalists and torturing enemies, is almost besides the point considering up to 44% of the population of the country lives in relative poverty: making all this talk about Madonna’s Mexico City gym little more but free advertisement aimed whoever happens to comprise the region’s landed gentry.

Still, you may be asking why of all places to put a luxury gym would you choose Mexico City? Madonna explains most bluntly: “Our plan is to use Mexico as a place to fine-tune our brand and then expand it to other countries and, in the long term, develop a global brand that includes the United States.”

Which is to say: she more or less opened a high-end luxury facility in a developing country so she could both capitalize on the people’s thirst for real American star power and also save some money…