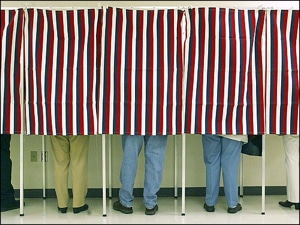 If you’re grieving over which ‘mamma grizzly’ did or didn’t get elected maybe it’s time to blame Google (our favorite corporate scapegoat), who according to political technology company Artistotle, sent more than 700,000 people in 12 battleground states to incorrect polling places this Election Day.

The issue is at best highlighted by Aristotle CEO John Phillips who calls the 700,000 plus errors “a pretty big deal,” especially considering that at the time of this article’s publication there remain races ‘too close to call.’

Politico reports: Aristotle premised its prediction on a series of simulations: The company selected about 1,000 households in targeted states, compared their polling place data against Google’s app and derived an error rate it later used to predict the number of area households possibly affected by the mishap.

Isn’t this an example of a corporation effecting an election in a hitherto entirely unforeseen manner, and wouldn’t Google, with all its alleged data mining antics, be just the company capable of selectively sending voters to the wrong location?

Which reminds us given Google’s own policies of penalizing those entities for misappropriating data online shouldn’t they too be flagged? Not to mention other bad business etiquette at the hands of entities like McDonald’s with its curt reminders to employees?

While it’s no doubt unfair to pass the blame on Google for what is ultimately (we hope) human error and one’s own responsibility, we can probably all agree that Google should be held to higher standards if we’re going to trust it with the business of determining whether we make it to our allotted polling place — no matter our political party.

Still one can’t help but wonder about that almost certainly benign statistic this report seems unable to specify: just how many of these 700,000 misdirected voters were in each political party? Shouldn’t we wonder (and rather loudly) if things may have been different had everything gone smoothly?