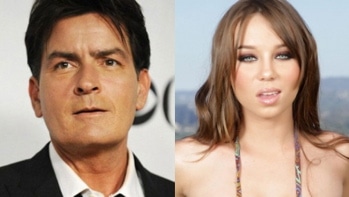 CoCo Sheen and Capri Anderson are desperate for your affections.

In a delightful twist of he said, she said and you said shut up you nxgga while I shove this recipe up my nose while you pretend I held a knife to your throat and she said I don’t know what you’re talking about, come the latest developments out of CoCo Sheen’s inner womb and Capri Anderson’s bounced check book. Michael K of Dlisted explains for us.

Dlisted:Capri Anderson (born name: Christina Walsh), the leased piece who felt the terror when she stared into Charlie Sheen’s coke canals of impending doom last month, made the media rounds yesterday to talk about the night Carlos Irwin Estevez brought the rage and forced her to lock her half-nekkid ass in the bathroom. Capri told both Good Morning America and Nightline that Charlie choked her ass out and threw a bunch of furniture at her after accusing her of stealing one of his fancy watches. Capri admitted that she was given $3,500 that night for her ho shit services and also said that Charlie tried to seal her mouth shut with a check for $20,000. But Charlie’s queefing out a totally different story.

Charlie denies both choking Capri and trying to buy her off for $20,000. Charlie says that Capri is the one who tried to snatch $1 million out of his ass in exchange for her silence. Charlie believes his story so much that he’s suing Capri for extortion. According to TMZ, Charlie’s lawsuit states that Capri threatened to fuck with his probation unless he handed over a million dollars.

Kids, we don’t know about you, but according to the chipmunks Fyodor and Mazeltov that we like to let to let strut around the offices they think a better idea might be if them two bitches get together for one more night of preferred debauchery, but this time instead of charging CoCo some astronomical fantasy, ‘Capri Extortion’ should charge CoCo a cut price of only $600 K and there upon after servicing CoCo, Capri Extortion should then let CoCo violently cry in her arms.

Who said love and extortion had to be so painful?