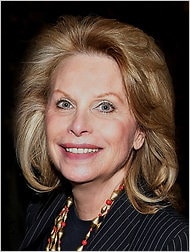 Hollywood has been left grasping for answers in the death of 64-year-old high-powered publicist Ronni Chasen, who was found dead her car, shot in the chest, after the premier screening of the Christina Aguilera/Cher film, Burlesque. But with the investigating detectives said to be “as lost as Ms. Chasen’s friends” the intrigue, it appears, is only beginning.

Chasen, by all accounts a fixture on the hollywood scene, began her career as an actress before turning to what the NY Times aptly called ‘the dark arts’ of publicity.  Unmarried, unshakeable, and ‘seemingly everywhere,’ the petite and perfectly coiffed New Yorker with a quick smile — always accentuated by blown out blonde hair – frequented all the right functions and is said to have been known for her ‘hard-charging style’ combined with an attention to detail.

Former LA Times reporter, Alan Citron, related a story which could be called representative of Chasen’s reputation to the NY Times, who reported: Ms. Chasen was working on behalf of Giancarlo Parretti, an Italian investor who took and ultimately lost control of M.G.M. Ms. Chasen met Mr. Citron for lunch at the Polo Lounge and playfully “threatened to kill me if we didn’t lay off him,” Mr. Citron said. When he laughed, Ms. Chasen picked up her butter knife and jokingly pressed it against his chest.

According to Vivian Mayer-Sitkin, a fellow publicity friend: “[Chasen] was the first one to point out that she was pushy or could drive people crazy and that was part of her success.” Which could very well make one wonder if similar incidents had sparked a bit of foul play in Beverly Hills, a city that averages only three homicides yearly.

First responders to the noirish murder scene found Ms. Chasen still alive, having suffered “multiple” gunshot wounds before, it seems, losing control of her vehicle and careening towards a streetlight in her black Mercedes-Benz. The publicist was taken to Cedars-Sinai Medical Center and pronounced dead at 1:30 a.m.

Police, who found no damage to the car from the gunshots, are at this point unable to tell whether the shooter was inside or outside the car at the time of the murder. Some point to a shattered passenger window as a possible place for entry of either bullets or intruders.

Now The Palm Springs International Film Festival members board has offered anyone who steps forward with info leading to a conviction of Chasen’s killer a $100,000 reward, adding yet another reason for some to continue investigating the already riveting story which the media, quite uncannily, seems to already be treating like the real-life manifestation of a classic Hollywood murder-mystery movie.