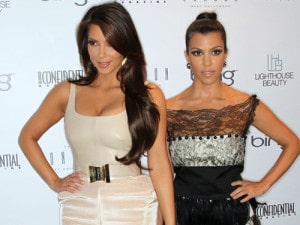 We’ve reached a watershed moment in the history of American culture television: Middle America’s favorite big-bootied, tabloid cover it-girl Kim Kardashian has agreed to grace our retinas with the first nationally televised celebrity botox treatment. Which can only mean sometime in the near future you too will be standing in a shopping aisle waiting for the cashier to quickly botox you  while you are looking for those loose pennies.

Like all things that involve spilled liposuctions, bad hair days and stumbling on intruding cactus plants we consulted with ‘Mazeltov,’ and ‘Fyodor,’ the resident chipmunks that play in the kitchen hallway if by trying to botox her face, ‘Kim Whoredasian‘ was in effect really attempting to botox her TV career which by now has suffered the spoiled stage phase that one finds in milk cartons left in the refrigerator since last Easter.

It should be counted as a move as stupid innovative as it is genius that Kim has elected to respond to recent criticism over the (alleged) tautness of her facial muscles directly by violently confirming all our accusations in an unlikely attempt to overcome them. The logic seems impeccable: Why quit with taking cameras into your bedroom (it’s worked for Kim before) when you could take them to your botox treatment?

The Huffington Post sums up the situation, we think, most succinctly: Kim Kardashian gets Botox injections on Sunday’s episode of ‘Keeping Up With the Kardashians’ and tells the doctor she doesn’t need numbing cream.

Khloe squirms in the background and tells Kim she is stupid as Kim tells her repeatedly to shut up.

There’s something uncannily familiar about Khloe’s high-pitched protestations: the way she makes such a show of her squirming, clenches her teeth as though appalled, peers through curling fingers almost like that she isn’t looking.

Is not Khloe, here, the mark of another reality television innovation: the built in re-tweetable squeal track? It’s not hard to imagine that this is certainly the heated, if vapid, reaction Kim intends from the American public… But also, is this not, at some level, a criticism of our criticism in all its ‘stupid’ vacuousness?