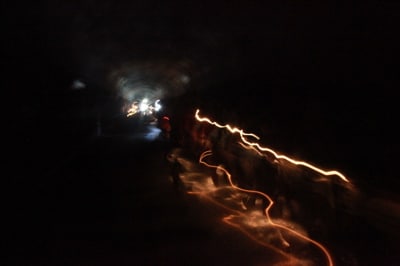 This is the first English reading of Parisian novelist Marie Darrieussecq’s first foray in theater: The Sea Museum. Orchestrated under Daniel Pettrow’s gentle yet positively jarring direction, set in a state of “no peace,” in a time of terminal crisis, it explores how we are to remain both benevolent and alive in an uncertain world – while posing such perennially French questions as whether or not the uneatable can be eaten, whether the enemy can be slept with, whether the longitude or latitude is the best angle by which to slice a tomato.

Marie Darieussecq might be signing here her first play but she certainly nestles herself deep into the tradition of stoic performance, absurdist convolutions and overall unwaveringly steep theater that has had France enamored for most of the past seven decades.

But by way of experiential novelty this time, thank Goodness, we now find ourselves knee-deep in the life-threatening reality of the underground tunnel, engulfed in the relentless wizardry of the Wooster Group’s pyrotechnics and very much steeped into not only the royal words, but the smells, the breaths, the dampness, the sounds, the very tangible darkness of our characters’ demise. Suddenly, this is no longer metaphorical. Suddenly, this is happening to us. Maybe some of the cryptic musings of these men and women don’t feed as much of an intellectual revelation as one could hope, but man, here we are, trapped underground in some moldy, ancient tunnel with no light, no exit and not enough flashlights to go round and that’s enough to make us feel the essence of what is at play here. Survival.

By the time we reach the very concrete end of the tunnel, huddled close around the cast, crouching on the murky rocks of the decayed construction, by the time the lights are dying to such an extent that their almost phosphorescent silhouettes are barely distinguishable from our own, by the time the words have lost so much meaning that all that remains is a shrill, desperate aria; for those of us who have indeed brushed past close to our own demise, it’s not a brainy French play anymore, it’s a very real little creature brought back to life, teeth and bile and claws and all, in the pit of our stomachs.

(I was trapped underground with a mass of strangers on 911 and I can tell you that in the Sea Museum setting, I had no qualms about pushing and eeling my way through, making sure I was at all times closest to the actors and to the light, and to the widest visibility of what’s going on, and I wasn’t going to let myself be trapped amidst the helpless human sea again.) 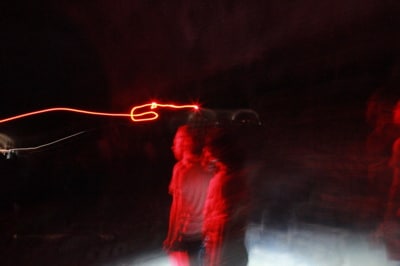