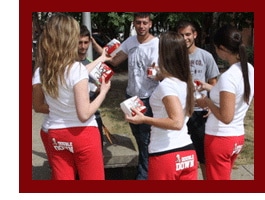 Aren’t you happy that another corporate entity is getting to objectify your sexuality?

Kentucky Fried Chicken Finger lickin’ what’s gud people has just initiated a new advertising campaign, the premise of which takes advantage of svelte ladies who consciously advertise KFC’s wares for $300 on their backsides.

Is this some of sort of perverse oxymoron? Anyone who frequents KFC over the long time is in no position to be wearing the type of pants that would draw the attention of most testerone charged men (one would argue the ultimate targeted end consumer), and yet here are healthy girls being enlisted for KFC’s newest bun- less sandwich (which we have to at least applaud KFC for their sense of irony in using females with ‘hot’ buns) as if eating one of KFC’s enviable calorie laden products sans bun will somehow redeem you and have you looking like the svelte thing in hot red pants parading in front of you in her sponsored track pants.

KFC launched the initiative this week in Louisville, Ky., where brand ambassadors sporting the one-of-a-kind Double Down clothing attracted fellow students across campus with KFC gift certificates. Female students interested in becoming ambassadors at their schools may contact KFC on the company’s Facebook page (www.facebook.com/kfc). KFC will select students at three additional campuses and outfit them with the customized sweat pants, KFC gift checks to distribute and a $500 stipend for their involvement.

Ladies, is the $500 worth the overt sexualization at the hands of another corporate?