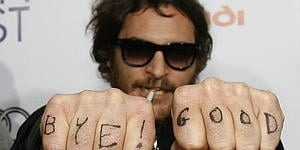 The buzz around Joaquin Phoenix’s upcoming documentary, I’m Still Here, which depicts the Grammy Award winning actor’s transformation into a hard-partying rapper has been pockmarked by “ironic quotation marks“ which have led many to speculate it may all be a piece of performance art, while others maintain, just as fervently, it all to be genuine… with the caveat that he’s gone crazy, of course.

He didn’t retire from acting, he “retired.”

Described as “a portrait of an artist at a crossroads,” nobody can decide if “I’m Still Here” (out Friday) is for real – which should be a major problem for Joaquin, as ‘realness’ has long been a rapper’s most important indicator of street cred and success potential.

Perhaps the problem is nobody’s cared to consider an answer somewhere in the middle: that Phoenixserious and ironic, real and unreal, simultaneously. could have reason to be both

Despite reports that he has the musical chops to pull it off (remember his performance as Johnny Cash), surely his star studded career and Hollywood history would hinder his hip-hop success no matter his skillset. Might, then, Jaoquin be looking for a way to call rap’s longtime emphasis on ‘being real’while trying to do just that. into question

If so, Mr. Phoenix is far from alone here: several high-profile rappers have been busy questioning rap’s emphasis on ‘realness’ both in and out of those pesky quotation points.

In a recent blogpost for XXL, rapper Skitch Hybrid argued “Realness” is overrated, and posed the question: So why did we decide that rappers have to act out everything they rap about?

Might there be a day when 130lb suburban teenage white kids (or Hollywood actors) can rap about ‘loccing ma’fuckaz’ solely for the art of it without being killed or laughed at; and what will that mean for rap — which many have already called a dead artform — as it adapts to the music scene of this 21st century? Could it be that Joaquin has arrived just in time to save it?