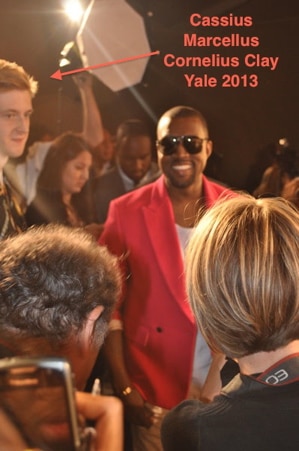 The Yale educated heir to the Clay family millions, has officially been ‘discovered’ by Kanye West just by chillin’ at his typical hangout spot, Barney’s New York. Which proves you can still be ‘discovered’ in America, but only if you’ve already got enough moolah clogging up your trust fund to make it moot.
The media for its part has been appeasing publicists with press statements like ‘So nice to see such a self-made kid getting the chance to hobnob with celebrities.’ But since when have the millionaire heirs to America’s greatest fortunes been ‘self-made’, and what has happened to the so-called American dream that, with enough bad boy attitude, anyone can party with all the hottest celebrities and be torn apart in tabloids regardless of [in]breeding, class, and social positioning?

In lieu of walking through yet another bright eyed informal introduction of Cassius Marcellus Cornelius Clay (CMCC hereafter), the 21st Century’s first media endorsed verified Horatio Alger, let’s examine just what’s at stake in CMCC’s new appointment as the idealized persona we should all someday aspire to be reborn as.

But first, how did this seemingly improbable scenario — milllionaire heir hits all the best parties in NYC with celebrity rapper — even take place?

Rewind to earlier this summer. Cassius is doing what he does best: dropping in at expensive, trendy designer stores. The lucky retailer of the day is Barney’s, New York. Today, his outfit is impeccable, topped off with high-end Italian designer shoes. In the midst of shopping, a man approaches Cassius, taps him on the shoulder, and tells him that he really, really loves the footwear. Cassius looks up; it’s Kanye West. Cassius keeps it cool, thanks him, and introduces himself.

In the weeks that follow, Kanye and Cassius exchange emails almost daily, and the young Yalie is invited into the superstar’s inner-circle. There are lavish parties, industry introductions, and a grand tour of Ye’s social life. Cassius ingratiates himself with Kanye’s fashion team, and meets all sorts of high-rollers at Kanye’s shindigs.

But before we start so gleefully gushing about ‘rags to riches,’ shouldn’t we at least re-examine just what those rags are made of? I mean, do vicuna suits, silk ties, and (probably argyle) cashmere sweater vests really qualify?

Few bloggers, if any, seem to be willing to discuss (outside of quotation marks) that this story has all the ostensible earmarks of the most ironic perversion of the all that is the American Dream in the relatively short, though tumultuous, history of American Popular Culture.

The laughable absurdity of regaling this as a ‘discovery’ of any sort, let alone a ‘self-made’ one, marks one of many ongoing re-definitions of all we’ve been told we’re supposed to hold dear being played out on auto diat. How is that even when it comes to getting ‘discovered’ you have to be a millionaire heir now — is the job market really that fucked up?

And one has to at least wonder how Cassius Clay went from being a badass black boxer who did jail time for refusing to fight in Vietnam (Muhammed Ali) to the whitest ‘blue blood’ to ever become the ‘life coach’ of a rapper accused — albeit slanderously — of ‘hating white people’ (CMCC)?’

Am I the only one confused here, or — as contemporary manifesto writer David Shields once said– are we ‘now, officially, lost?’ Something to think about next time you’re waiting to get picked up by a celeb at Barney’s while petting a llama in your favorite a paisley bowtie…