There are times when I fret over the state of American culture. It was recently announced, for example, that Justin Beiber is coming out with a memoir entitled “First Step 2 Forever”.  Not to over-dramatize it, but one could be forgiven for ascribing apocalyptic implications to this cultural development. Are we really going to embrace the “life story” of a pre-pubescent?

And there are plenty of other examples. We have a former vice-presidential candidate whose is now more likely to be seen in the tabloids than Paris Hilton. The cast of the Jersey Shore just tripled their earnings as perhaps the most media-hyped oddity ever. Essentially, they are a freak show of the YouTube age; an orange-skinned grotesquerie from which we can’t pull our gaze.

So, with a sigh, we hang our heads as we ask ourselves: Have we reached a cultural nadir? And then we gasp in horror as we ponder the unfathomable: Does America even have culture? 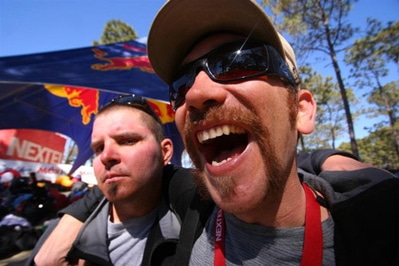 Of course, there are those in the world who believe that the words “American” and “culture” are mutually exclusive. And, as proud and patriotic as we are, we can quickly enumerate the reasons why this isn’t true: Jazz started in America. So did rap music and country music. We also invented TV, and Hollywood is the swirling center of the movie universe. On the fine arts side, we have more top art museums than any other country in the world. Hell, our constitution guarantees freedom of expression. We’re practically a culture factory.

So why does our culture seem to revolve around the trivial?  For example, where is the value in icons created by corporations and dissected by TMZ?

A new performance art installation in New York explores this. It has a fantastic name—Starbox—and involves people lining up outside of an 8×8 Mylar box for the opportunity to see a celebrity. The catch? They do not know who it is—and they have to sign a non-disclosure agreement saying that they can’t tell anyone who it is.  They are not going there because they appreciate an artist’s work… they want to gawk at someone famous.