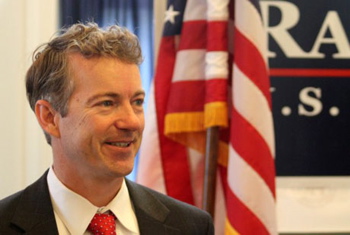 What’s a well rounded Baptist college education without a few bong rips and idolizing false prophets? Just ask Conservative Senate seat hopeful Rand Paul, he’s got firsthand experience of good old Baptist rebellion during his formative years. While his Baylor classmates were banging the Bible and tucked in by ten; Rand was smoking the good stuff and causing debauchery with his NoZe brothers, a fringe secret society, who rebelled from Baylor’s strict Baptist code of conduct.

GQ: the NoZe Brothers would perform “Christian” songs like “Rock Around the Cross”; they’d parade around campus carrying a giant picture of Anita Bryant with a large hole cut out of her mouth after the former beauty queen proclaimed oral sex sinful; and they’d run ads for a Waco strip club on the back page of The Rope. In 1978, the Baylor administration became so fed up with the NoZe that it suspended the group from campus for being, in the words of Baylor’s president at the time, “lewd, crude, and grossly sacrilegious.”

When singing Christian anthems and soliciting strip clubs got old; Rand begin engaging in even wilder behavior, once even kidnapping a female fellow classmate, blindfolded her and made her worship creek water.

GQ: “They never hurt me, they never did anything wrong, but the whole thing was kind of sadistic. They were messing with my mind. It was some kind of joke.” She hadn’t actually realized that Paul wound up leaving Baylor early. “I just know I never saw Randy after that—for understandable reasons, I think.”

Rand, who left Baylor without receiving an undergraduate degree; passed the MCATs and advanced to medical school without finishing his education.

Hm. A conservative, second-generation politician from Texas with an affinity for Secret Society high-jinks, smoking pot, and not finishing what he has started? We’ve never see that before.

Here’s to knowing we can continue with politics as usual.