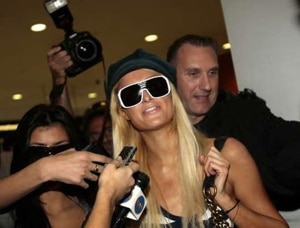 The lies are growing bolder and desperate by the day.

As 98 percent of the Western world knows by now, Parasite Hilton was busted over the weekend with a baggie of coco pops and essentially got herself in big trouble. Of course Parasite initially denied that the coco pops sitting halfway up her nostrils and the other half crying to be let into the other nostril in her purse didn’t belong to her. Then she remembered the purse didn’t actually belong to her thus making her innocent but then suddenly realized after more thorough investigation that the purse did in fact belong to her but that said the little coco pop packet crying to find its way up Parasite’s other nostril didn’t belong to her. Didn’t belong to her because ‘obviously’ she was set up and some witch (probably Lilo– who’s probably laughing up and down in her used orange jumpsuit) set her up instead. Which has us wondering- ‘Is there a conspiracy against Parasite?’ Parasite seems to think so.

D listed: The cop writes that right after they pulled Wonky’s boyfriend Cy Waits over, she started complaining about how she needed to take a piss (aka flush the evidence down the toilet). So the cop held on to Wonky’s purse and escorted her into the Wynn Hotel so she could use the bathroom.

Which at this stage Parasite starts preying that the little baggie of coco pops in her bag quietly starts crawling out and into the desert heat. But after realizing that coco pops had no intention of leaving her purse and was fully committed to finding itself up mama’s other nostril, Parasite decided to see if she could make a quick switch the bait decoy with her chaff lipstick…

Once they were inside, she asked the cop if she could get some lip chap out of her purse. The cop when on to write: “As she began to open it, I saw a small bindle of what I believed to be cocaine in a clear baggie begin to fall from the purse and into my hand.”

Oh my lord kids, I’m trembling, tell me this isn’t true- tell me that Parasite isn’t a cock coke whore?!

The cop also found a broken Albuterol tablet and Zig Zag rolling papers. Wonks admitted that the Albuterol belonged to her, but she pulled an excuse straight out of every episode of Cops by saying that the coke wasn’t hers. And not only was the coke not hers, but neither was the purse! This bitch told the police that her friend let her borrow the purse earlier. Wonks said that she had seen the bag of coke in the purse earlier, but she thought “it was gum.”

Gum?! Oh Parasite, the tears are flying everywhere, you my hero, how could you have allowed yourself to become the thing we all know you despise?!

A source claims that Wonky is saying, “I had no idea the cocaine was there. I swear on my life. It could be a setup. Everyone knows how against cocaine I am.”

Yes Parasite I want to confess it was the intern that we fired last week, I’m so sure they set you up, set you up because they realized how much it would break my heart to see your sorry ass back in jail…