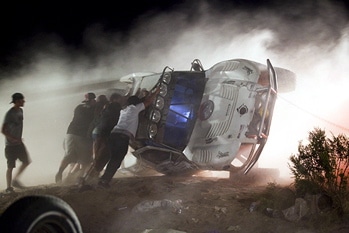 As hundreds of excited off-road racing enthusiasts stood within arm’s length of the trucks racing through the Mojave Desert at Saturday night’s California 200, the unthinkable happened. As one racer took a jump at a high speed the terror began. Upon landing, his truck rolled sideways into the crowd, sending people in crowd flying onto the track, a track with nothing separating the spectators from the trucks, killing eight and injuring twelve.

The driver who crashed, 28-year-old Brett M. Sloppy, of San Marcos, was going 45 to 50 mph when he crashed his truck. California Highway Patrol Officer Joaquin Zubieta said that alcohol did not play a role in the crash.

What a bad last name to have to carry after having an accident like that.

Huffington Post: “You could touch it if you wanted to. It’s part of the excitement,” said 19-year-old Niky Carmikle, who stood sobbing over a makeshift memorial on the spot of the crash Sunday. Her boyfriend, 24-year-old Zachary Freeman of Ventura, was killed in the crash. “There’s always that risk factor, but you just don’t expect that it will happen to you.”

The controversy now lies in whose responsibility it was to have a safe track for both drivers and spectators. According to Office Zubieta, state vehicle do not apply to this case; as the race was a sanction event approved by the federal Bureau of Land Management, who owns the land where the race was held.

The BLM has released a statement; explain that safety was the responsibility of the race organizer, Mojave Desert Racing, out of South El Monte, California.  According to Mojave Desert Racing’s permit, it states that the drivers can only travel 15 mph or less when within 50 feet of the spectators, and there can be no more than 300 spectators at the event.

It’s good to see that there is no scapegoating going on here. Responsibility should fall on all parties involved, both the BLM and the MDR. When you have innocent spectators’ bodies launching onto the track as a speeding truck hits them; it’s no time to point fingers.