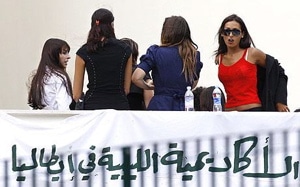 Are you a ‘hot’ Italian woman? If so, Libyan dictator Moamar Gaddafi may just pay you to convert to Islam. If one sex-crazed misogynist pseudo-dictator – other than Presidente Silvio Berlusconi who is said to control almost 90% of all Italian media – wasn’t enough for Italy, now another is taking up residence, Libyan racehorses, ‘Amazonian’ bodyguards and all.

The Financial Times: Italy has become Gaddafi’s Disneyland, the amusement park for his senile vanities, and the reason, unfortunately is political. Since Gaddafi pays, his reasons become ‘our’ reasons and his politics becomes ‘our’ politics”, wrote Farefuturo, a political think-tank close to Gianfranco Fini, speaker of the lower house.

The report continues, “The Libyan Investment Authority raised its stake in the Italian lender at the end of July, making Libyan government-controlled investors the largest combined shareholders in the bank, with more that 7 per cent of the total capital.”

But our Dear Colonel Gaddafi isn’t just tanning (like Silvio who says when he tans he gets darker than Obama) on the island of Capri, he’s recruiting hot young women, for what one can only imagine is will soon be his harem.

AP: Gadhafi arrived in Rome on Sunday and promptly gave a lesson on Islam to a few hundred young Italian women recruited by a modeling agency and paid to attend the lecture. Gaddafi handed out copies of the Quran, urged the women to convert, and participants said three young women converted on the spot.

The Italian media, most likely due to the Vatican’s close proximity and its own misogynistic predispositions (uncle Silvio controls it after all), is largely spinning the issue as a religious one of Catholicism vs. Islam.

The greater issue at hand, however (perhaps the strategically hidden one) shouldn’t be Gaddafi’s lessons themselves, but his target audience: young women, all of whom must necessarily be attractive.

How can Gaddafi, who in all seriousness claims himself to be a feminist, offer only to teach his esoteric knowledge to the most attractive women and get away with it? Is this not misogyny writ large (by this rationale, Berlusconi, the infamous womanizer that he is, must also be a devout feminist). Moreover, one one should examine Silvio’s intentions in even offering his youngest and his hottest to Gaddafi to begin with.

Is this not a way of bridging filial relations, in the old patriarchical manner, only substituting the looks that one was born with her born position in the landed gentry? We don’t need a sociologist to tell us that sexually exchanging young, privileged women is how omnipotent rulers have long created interlocked power structures and cemented relations between once-warring tribes.

The only remaining question in the consummation of this is alliance is the as yet un-discussed one: just how many Libyan ‘Amazon’ bodyguard is uncle Silvio going to be breaking rolled up petro-dollar bills on?

The Telegraph reports: Libya’s Colonel Muammar Gaddafi will pitch a giant Bedouin tent in Rome this weekend as he arrives in the Italian capital to celebrate the second anniversary of his immigration deal with Silvio Berlusconi.

Pitch a tent, eh? Moamar and Silvio, oh what a duo.