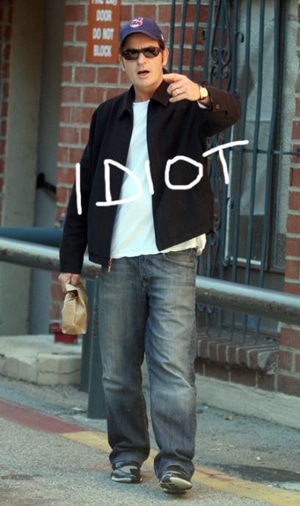 The stupidity is too hard to believe.

With each passing week as we watch the reality show called “My name is Charlie Sheen and I am about to self disintegrate in front of your very eyes,” comes the latest revelation that our collective preferred public nuisance (and no doubt media whore) was caught at the time of his arrest at Christmas (you remember the magnificent punch and drunk session he had with wifey) with a fake ID. Which makes us wonder, was Charlie Sheen afraid he wouldn’t get in into his local bar without his fake ID or worse…?

PerezHilton: Charlie Sheen kept a fake ID in his wallet and that’s the one he gave to police when he was arrested after the Christmas Day incident with his wife Brooke Mueller last year!

“It’s fake, I had it made from someone on the set after I lost the real one.”

The cop confiscated the license, but he wasn’t charged for possessing the fake California

ID even though it’s illegal.

Where exactly was Charlie planning on going that he needed a fake ID. He’s just about the most recognizable human being in the world after Adolf Hitler? Was Charlie planning on buying the good shit in Tijuana, Mexico and worried that the border man wouldn’t let him drop by without his fake ID, was it so he could to some special healing ranch where little midgets would spend the day running around making sure the picture in your wallet matched the tan on your face. Or was Charlie just doing what we secretly think he is planning on one day- changing his name to Charlie Tijuana Smith and getting himself a normal existence?

Is Brooke Mueller about to leave Charlie Sheen?

Is it a good idea to wear a thick hairy moustache and a hooded sweat top when carrying an affair behind your wife’s back? Hanging out with Charlie Sheen.

Charlie Sheen is Having The Best Holidays Ever