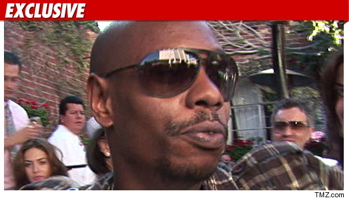 The curse of Dave Chappelle…

Dave Chappelle this weekend has decided to grace us with the latest installment of anti social behavior. One can enjoy the lampooning of culture on TV, but what are we to think when the lampooning extends to Mr Chappelle’s personal life?

Erratic behavior? Isn’t this the same man who walked away from a multi million dollar deal courtesy of Comedy Central and holed himself deep in Africa? But when the pilot says erratic, he really means erratic….

A source extremely familiar with the incident tells TMZ Chappelle boarded a private jet in New Jersey last night bound for Ohio — where the actor lives.

During the flight, we’re told Dave “freaked out” and refused to put his seat belt on. Then — according to sources — Dave repeatedly walked into the cockpit, asking how much longer the flight would be, and started grabbing the pilot’s arms.

Is this part of Dave’s new comedy routine? Grabbing at airplane pilot’s arms in midflight? What if he came into the cockpit wearing a horse outfit, at least the pilot could see it was Dave ‘horsing’ around. Unfortunately there was no ‘horse’ uniform….

We’re told Chappelle then checked into a nearby hotel for the night. Sources at the hotel tell us Dave has been telling hotel employees he wanted to rent a car to drive back to Ohio … only he couldn’t remember where he lived.

Chappelle was spotted wandering out of the hotel early this morning.

Should someone be looking for the horse tranquilizers right about now?

A rep for Chappelle explains the incident to TMZ by saying Dave really needed to use the restroom — he ate something that didn’t sit well — and the bathroom on the plane was “not the kind he needed.”

We’re not sure if Dave will ever find the right kind of bathroom ‘he’ needs, but let’s hope he at least finds the right loony bin…