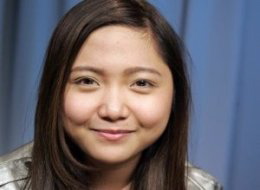 Do you sound better when you look like what’s expected of you?

Here’s a story that’s caught our attention. Charice Pempengco, a young teenage singer whose career shot in over drive after appearing on the Ellen DeGeneres’ and Oprah Winfrey’s talk shows, has received plastic surgery procedures. Which begs the question, why is a perfectly normal 18 year old girl feel compelled to alter her appearance?

Huffington Post: MANILA, Philippines — Filipino teenage singer Charice Pempengco says she prepared for her debut on the hit TV show “Glee” by getting Botox and an anti-aging procedure “to look fresh on camera.”

To look fresh on camera? If Charice’s face doesn’t look fresh at the age of 18, God help the rest of us who are north of 21. And what is this business of making her face more narrow? Does the song sound better when you look like a white barbie doll? Is it perceived more legitimate if it comes out of a bare topped semi looking fashion model? Should we be reading tomorrow morning that the young singer is consulting a plastic surgeon for new breasts? Is it any wonder there are so many young women running around so neurotically?

Charice, in the same interview, said last week’s face makeover was part of her big preparations for her appearance on the hit show’s second season. She starts filming at the end of this month.

“All people will be anticipating how will Charice look? Is she good enough to pit against Rachel Berry? So of course there is tremendous pressure,” Charice said.

In an earlier TV interview, she said she auditioned for “Glee” in mid-June in Los Angeles and was thankful to have been accepted.

One has to wonder did the producers advised Charice it would serve her well if she undertook these procedures. After all, if she was good enough to get accepted to the show in the first place, why did the young girl feel compelled to undertake these serious cosmetic proceedings?

Does this suggest next time a young woman gets accepted to a prestigious university, job or whatever that she be expected to make herself resemble some pre conceived image of perfection or risk not excelling? Can a woman only excel if she looks perfect? Can a man only excel if he has the perfect job and bank account? Welcome to modern America…So much for reality TV.

Let me know when Charice gets her breasts done…