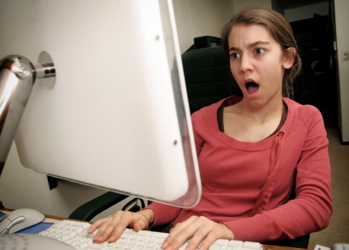 According to the folks at Gizmodo, they did a bit of snooping around and came up with some interesting generalizations. First, short men lie like hell – so they all pretend they are taller than they are, where as women lie as hell to appear shorter as well (apparently us men are spooked by women taller than 6ft).

Gizmodo: Do you have money to burn?

In other words, if you’re poor like us – bad luck, you ain’t getting nothing. Of course us journalists do (I hope) come with more charm.

Are you using last decade’s photos? C’mon, we know you are…

As you can see, over a third of the hottest photos on the site are a year old or more. And more than twice as many hot photos are over three years old (12%) as average-looking ones (5%), which makes sense because people are more inclined to cling to the pics that make them look their best.

I wonder why? Is that because everyone else so by default all the nervous nellies out there have to lie just to stay in the race.

REALITY: 80% of self-identified bisexuals are only interested in one gender.

OkCupid is a gay- and bi-friendly place and it’s not our intention here to call into question anyone’s sexual identity. But when we looked into messaging trends by sexuality, we were very surprised at what we found. People who describe themselves as bisexual overwhelmingly message either one sex or the other, not both as you might expect.

So in other words, a fantasy is just that and the real push is the disguised lopsided approach. Keep hunting closet gays.

The moral of the day, the truth sucks and people are loathe to use it when it comes to getting payola. Oh well. Next.