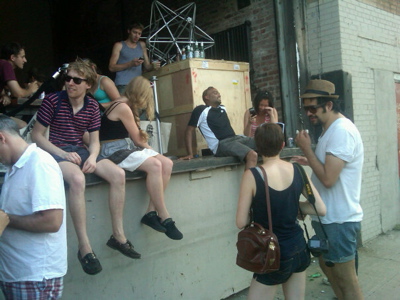 I arrived at 3rd Ward about just before two, a few minutes before everything was supposed to kick off. It was my first visit and I didn’t have much of an idea of what I was walking into but I’d definitely heard the name.

An artists’ co-op in the enclave of Morgantown, Bushwick, 3rd Ward was founded in 2006 by Jason Goodman and Jeremy Lovitt as “a place for young adults to make things,” commented Goodman. Offering classes on everything from screen-printing to beekeeping, their memberships range from forty nine to four hundred and forty nine dollars. Working nimbly with the recession seems to have paid off.

There were already at least eighty people inside awaiting eagerly the, as advertised, refreshments and festivities. Today was the third annual PIG OUT! The promise of free beer has yet to fail a party Brooklyn. Goodman himself was behind one of the grills.

About a third of the crowd had gathered into a huddled mass in front of the Fire Island brewery table. By 2:15 when they started serving there were one hundred or so singles in hand, ready to fill the tip jar. They were going to be giving out their Lighthouse Ale and Red Wagon IPA. I noticed there was actually a line around the hallway leading into this cluster fuck and I wanted no part of it.  I maneuvered my way to the empty corner on the left side of the table, Cutting forty ‘in line’ fuckers who seemed none the wiser. How did they not see this? When you don’t wait in line, as a rule, things tend to work out. Always rely on the crowd’s lack of creativity. Nurse your advantage.

I was the fifth person to get my wrist stamped and ordered two bottles of Lighthouse, which I was promptly handed. Pleased with my play, beers in hand, I slinked over to the backyard to find the roasted pig had its own trail of tears winding up to it. Grief to the starving writer I surmised. None of the bands were to start for another hour or so. I was surprised to see so many stroller-chauffeured kids. At one point I found myself having a conversation with an older hippy, rocker named El, who told me he was a shaman and why Stephen Malkmus was some sort of crack a jack. Shrugging, I then returned inside to pull the same scam that netted me beer the first time.

Inside was like being at a carnival without the rides. Everyone was crammed in shoulder to shoulder now, the hip little sexpots out in full form. There were a lot tables where anyone could sign up for various classes even one for an Urban Agriculture table, courtesy of a couple of heckling chickens.

I met Mandisa Wright, a marketing and events assistant. When I asked her what 3rd Ward was for her, she told me “3rd Ward is a place where you can see the impact that you have on the world.” 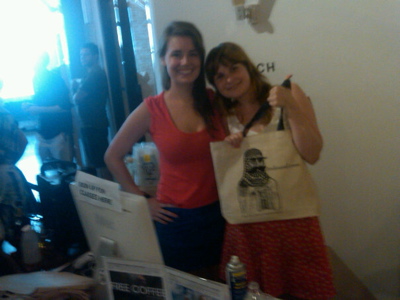