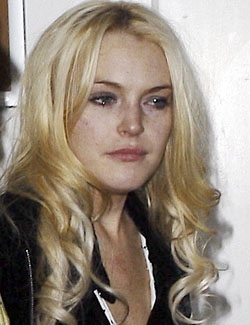 According to Lilo’s tweeter- Lilo just got socked in the face and if you must know all the interns are doing high fives and dancing the moon dance. The saga courtesy of Michael K of D listed.

D listed: Early this morning at Voyeur in L.A., Lindsay was sitting at a private booth softly serenading a bottle of Jack Daniels with her acoustic version of Klymaxx’s “I Miss You”, when a cocktail waitress (who was acting on behalf of the people of the world) delivered an unannounced whooping to her trick face.

Blohan Tweeted that she has no idea why Carvel’s future mascot would do such a thing. But Usweekly does! Their source has the story: “The waitress has a history with Doug Reinhardt, and Lohan was hanging out with him. She was jealous, and out of nowhere, the waitress punched her in the face! Doug didn’t want any part of it and went to the other side of the booth. Lohan ran out. Lohan went to a party at the nearby Rockstar House — and ran into the waitress again! Lohan showed up and cried because the waitress was there as well. Some birthday.”

Hey trick a treat! Wow, should we all be collectively joyed that Lilo got socked in the face, after all if there is one good for nothing ho that deserves the nations collective spanking this one would be it. Of course what makes us laugh (we are cynical bitches) is Lilo’s remark that she couldn’t figure out why anyone would want to do this to her? Really, the little mice parading up and down her night gown never bothered to tell her all the kids think she’s a self ingratiating johhny come lately who takes liberties to extremes and still manages to avoid deportation by the US government.

Lilo, can we suggest for your next birthday a drive up to Canada and a quiet stint in a rehab overlooking lots of green fields. Happy birthday bitch!