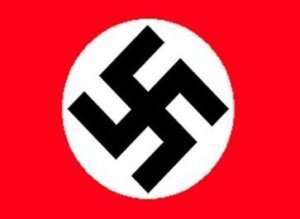 The shocking things that keep going on in Arizona.

We’re trying to wrap our minds around this one, but frankly were not quite sure if we can. The state of Arizona has allowed Jason Ready, known for his disputed ties to the Neo Nazi movement to outfit an armed voluntary patrol unit on the outskirts of the Arizona border. Which begs the question what exactly is going on in Arizona these days?

Huffington Post: Jason “J.T.” Ready is taking matters into his own hands, declaring war on “narco-terrorists” and keeping an eye out for illegal immigrants. So far, he says his patrols have only found a few border crossers who were given water and handed over to the Border Patrol.

But local law enforcement are nervous given that Ready’s group is heavily armed and identifies with the National Socialist Movement, an organization that believes only non-Jewish, white heterosexuals should be American citizens and that everyone who isn’t white should leave the country “peacefully or by force.”

White heterosexuals? Does that mean if Mr Ready comes across a black bunny rabbit in the dessert he’s going to shoot it? Or is he kindly going to put all his weapons in the trunk while he calls the Border Patrol to take over?

An escalation of civilian border watches have taken root in Arizona in recent years, including the Minutemen movement. Various groups patrol the desert on foot, horseback and in airplanes and report suspicious activity to the Border Patrol, and generally, they have not caused problems for law enforcement.

But Ready, a 37-year-old ex-Marine, is different. He and his friends are outfitted with military fatigues, body armor and gas masks, and carry assault rifles. Ready takes offense at the term “neo-Nazi,” but admits he identifies with the National Socialist Movement.

Which is like saying Mr Ready doesn’t like war or death, but hasn’t met a war movie he hasn’t enjoyed- never mind all the war toys he keeps in the back of his trunk. Just in case, of course….

Law enforcement officials said patrols like Ready’s could undercut the work of the thousands of officers on duty every day across the border, especially if they try to enforce the law themselves in carrying out vigilante justice.

Such groups continue to operate in Arizona, and law enforcement officials generally don’t take issue with them as long as they don’t take matters into their own hands.

Border Patrol spokesman Omar Candelaria said the agency appreciates the extra eyes and ears but they would prefer actual law enforcement be left to professionals.