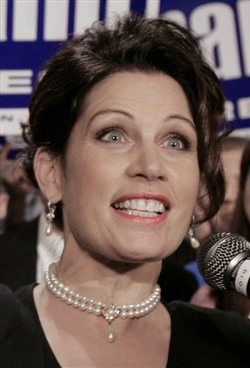 Full-time nut-job and occasional Congresswoman Michelle Bachman took time out of her busy schedule of making crazy pronouncements about gays and foreigners to appear on rabid right-wing radio to declare President Obama the the worst American president ever.

Here’s an extremely well-thought out gem from the woman who makes Orly Taitz look like Susan B. Anthony, who’s not quite hot enough to justify her stupidity like her equally deranged pal Sarah Palin can.

“And the thing is, here we are, people can’t wait until November. They’re practically lining up for polls now, they can’t wait to go out and vote. The only thing is people wish Barack Obama was up for re-election right now, because they’d honestly love to have a chance to throw him out of office. Everywhere I go, people ask me, ‘Michele, can we impeach the president?’ They want a referendum on him. I also had someone today say, ‘There’s no way he’ll run for a second term. No way. No one would vote for him.’ I don’t know if the White House understands how the floor has dropped out under support for this president.”

Like most schizophrenic republican wackos, what Joesph McCarthy in lipstick doesn’t realize is that unlike Fox News and the padded walls of right wing radio, facts and history actually have meaning.

In response to Bachman’s major statement, Twin Cities alt-weekly City Pages did some research and discovered that as far as those numbers go, Obama’s fairing much better than Presidents Bush and Carter. Worse yet, he’s even doing better than god of America Ronald Reagan.

One would naturally expect Obama’s popularity to be low within the GOP base, especially considering it was low on Jan 22, 2009 (his inauguration date).

Today’s GOP puts all their hatred of gays, blacks, foreigners, woman, and basically anybody living a happy existence in abeyance to pounce on Obama at any given opportunity however baseless. Of course none of these awfully inconvenient facts mean anything to Michelle Bachman and her crazy flag-waving, pick-up truck riding ilk.