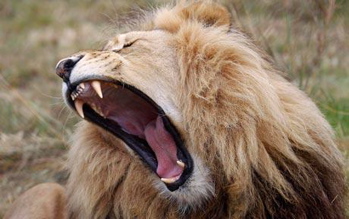 The new delicacy that’s here courtesy of the World Cup.

Animal activist are up in arms today as the Il Vinaio restaurant near Phoenix, Arizona, is offering a “lion burger” for $21. Want to place an order read on…

UK Telegraph: The  burger is served with spicy homemade crisps and roast corn on the cob.

Homemade crisps? Shouldn’t it be getting served with a side of giraffe ears and gazelle gizzards?

Owner Cameron Selogie said the decision to serve the lion burgers was a tribute to South Africa, host nation of the World Cup.

He said: “In Africa they do eat lions, so I assume if it’s OK for Africans to eat lions then it should be OK for us.” Mr Selogie added: “We thought that since the World Cup was in Africa that the lion burger might be interesting for some of our more adventurous customers.” The meat is from a lion that was raised at a free range farm in Illinois, which is regulated by the US Department of Agriculture.

Adventurous? To say the least. Customers may have to be prepared to come and eat their lion burger in bomb protection gear as the restaurant has already been threatened with bomb threats and countless angry email letters. By the way what do they mean by the lion being raised on a free range farm? Was it fed buffalo and stray dogs that were quarantined and ensured a healthy diet?

“Most of them, when we tell them the facts, that this is farm raised and it doesn’t hurt the endangered animals, seem pretty reasonable.” The restaurant ordered 10 pounds of African lion meat from the farm and it is mixed with ground beef to make a “lion burger.” The restaurant is to serve about 15 burgers on Wednesday and the same on Thursday as part of its World Cup celebrations. Animal rights activists are expected to protest outside.

A reasonable argument no doubt, but one would strongly suggest that customers come to the dinner table wearing their sturdiest anti bomb gear nevertheless…

Susan Cooper, a regular customer at the restaurant and an animal-rights activist, told the Arizona Republic: “I’m thoroughly disgusted to say the least. What’s next? Dogs? Cats?”

Uhm, we are afraid to break this to Ms Cooper, but they’ve been cats and dogs in some parts of the world since the dawn of time. Anyway we suggest you try your lion burger on the medium to well done side, not that the lion will mind too much if you would rather go to the medium to completely rare side…