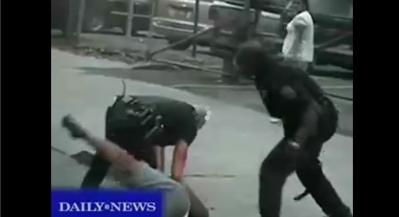 The rough and tumble beat of David London.

If you ever come across police officer David London we kindly ask you to get out of his way and quickly get the hell away. Why you ask. The NY Post explains.

A city housing cop is on trial for the caught-on-video baton beating of a cuffed and cowering Army vet in a W. 93rd St. housing project hallway back in 2008.

Prosecutors plan to show jurors a chilling tape in which Harvin (the victim- an army veteran) first gives the cop a shove while trying to get into a project elevator.

London allegedly reaches into the elevator, grabs Harvin, and begins beating and macing him.

He delivers some 20 baton blows and kicks to Harvin, a beating that continues even after Harvin is cuffed, prone and cowering.

At one point, London appears to stop to take a cell phone call, then resumes the beating.

An unpleasant way to spend your Monday afternoon you imagine, having your head clobbered, with a moment’s respite so our pal London can take a phone call from his Chinese delivery order before resuming the delectable beating he was just getting into before dim sum.

But now there’s a catch and it may well be that London may not be served justice because the victim, Walter Harvin can not suddenly be found and asked to turn up to his own prosecution trial. Something that has all our interns over at the office wondering.

The prosecutor said his office has tried to contact Harvin directly and through his family by emailing, phoning, and door knocking.

“They have not heard from him for some time,” Drucker said. Meanwhile, it has been “many, many months” since the DA’s office’s last contact with him.

Harvin is a combat vet from Iraq who was already suffering from post traumatic stress from his time on the battlefield, from which he had just returned two weeks before the beating.

Of course by the time Harvin returns home he’s got new traumatic stresses to think about:

“Most of the blows came while he was cuffed and down,” then-DA Robert Morgenthau had said in announcing London’s indictment on charges of felony assault and filing a false criminal complaint against Harvin.
As for London’s defense team?
London’s lawyer, Steve Worth, describes his client as a married father of three and a 15-year NYPD veteran with “an exemplary record–” despite a history of at least one excessive force complaint with the Civilian Complaint Review Board.

Mr Worth dear, we beg to differ. We earnestly think your client is the lowest form of scum on the planet and a discredit to the police form, the state and to the cause and honor that Mr Harvin went in harms way to defend on behalf and including people like Mr London. Please judge see that justice is served, Mr London also needs to come to terms with his behavior the same way Mr Harvin has unfortunately tried to come to terms with the way he was treated. Appalling indeed!