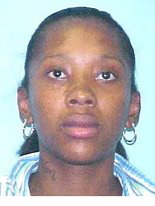 Media today enables our culture to see some of the best fucked up mothers around. Most recently we have been seeing celebrity trashstitute mothers like Danielle Staub and her 40 year old plastic bodied sex tape, Dina Lohan and her mother/daughter coke sharing habits, and the likes Bombshell McGee and her Nazi-White Supremacist ideals she tries to instill in her children. Nothing though, compares to the piece of shit, 24 year old mother of 3, Dashnay Beckwith.

When a child has not shown up to school for 50+ days, a school teacher, in this case worker, sometimes feels the need to see if the child is alright. When arriving at Dashnay’s residence around 2pm, the worker noticed the door was already unlocked. When they entered, it seemed like no one was around until they spotted the 6year old boy barely wearing anything with his 2 and 3 year old siblings, both in which were wearing nothing. To top it all off they were sleeping out on the balcony of the home.

Looking malnourished, the worker searched for something to drink and eat for the children….there was nothing, and the refrigerator had not be on since January. When asked where their mother was, the boys were told to respond by saying she was in the back room sleeping. When police came they searched the back room and SURPRISE……Dashnay was not there. Luckily, the children are in state custody now.

Dashnay is said to have called the Jersey Journal saying that she was at a Job Interview when the school worker came by. Since her call, Dashnay has not been seen or located. However, if and when she is found authorities plan to charge her with child abuse, cruelty and endangerment. But somehow we suspect this week Dashnay doesn’t wont be found this week.

Our deepest commiserations for the children, as for Dashnay Beckwith isn’t it time you got neutered or some much needed counseling?

If you come across Dashnay at some crack den please don’t hesitate to call authorities at the following number:

Anyone with information about on her whereabouts is asked to call the Jersey City police tip line at (201) 547-JAIL.