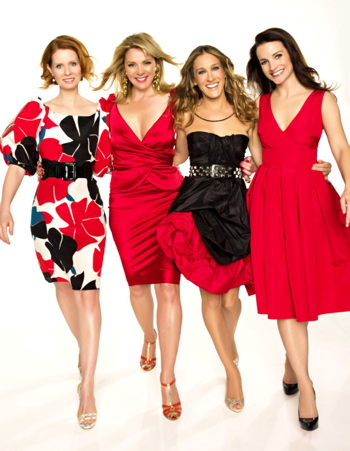 So of COURSE they have a lot of sex. Realism is not the point. The show is much closer in some parts to a field safari guide to all the ways that dating can go awry the modern age. Of COURSE “plays with balls man” is flat and one dimensional. His entire purpose is to exist so that some woman watching the show will think to herself “YES. I IDENTIFY with that issue.”

Criticism # 3: Those women are ugly. No man would ever actually date them. Ew.

This one particularly infuriates me. The show made the move to cast actresses who are neither other-worldly beautiful nor women who can play the Dove commercial angle of being “just an average Jane.” With the exception of Kristin Davis (who is conventionally gorgeous by any measure) all of them are interesting and unconventional looking. They have some bad haircuts (Miranda), horrible outfits (Carrie), and age lines (Samantha). Miranda, yes, is often in an ugly pantsuit, but also SHE’S A LAWYER. There is a sort of vindictive hatred against these actresses and their appearances–as if it’s absolutely insulting for a woman over the age of 30 to even APPEAR on television as anything but the mother in a Lifetime movie. We blame the media for putting out unrealistic and unattainable images of women–but viciously mock any woman who doesn’t make us feel ugly.

Criticism # 4: All those women do is talk about men. It is soooooo degrading.

Oh, hater, Miranda thinks so too. In Season 2 “Take Me Out to the Ballgame” she rails: “How does it happen that four smart women have nothing to talk about but boyfriends? It’s like seventh grade but with bank accounts. What about us? What we think, we feel, we know, Christ! Does it always have to be about them? Just give me a call when you’re ready to talk about something besides men.” Note that this is only the first episode of Season 2–an ocean of man talk lies ahead. The criticism is fair and correct, but it’s a little like critiquing characters for talking a lot about paper on “The Office,” crime on “CSI,” or The Island on “Lost.” It is a show about four women’s friendship and four women’s relationships. That’s really it. The episodes are structured so that anything that we see happening is directly relevant to Carrie’s sex column. No, we don’t see a lot of Samantha in public relations meetings or Miranda writing briefs. Do we want to?

Criticism # 5: The portrayal of homosexuals is absurd. Possibly indefensible.

Correct, criticizer. So indefensible that I will not even attempt to defend it. Sorry, Michael Patrick.

A Sex-and-the-City hating gentleman asked Cynthia Nixon in an interview “How can every woman be one of those four women? What is this ‘I’m a Miranda’ ‘I’m a Charlotte’ crap?” She smiled sweetly and said, “I guess that’s just the beauty of an archetype.”

Exactly, Cynthia. The point of the show is not to document what life is truly like for the average single woman in her 30s, nor is it to provide role models for how women ought to act. It paints larger than life characters with broad brush strokes. The writers hope that some men, some situations, some of the women are identifiable. Those that are not will hopefully be funny.

Now, onto the more important question: will the ridiculous bird thing on Carrie’s head be making a repeat appearance? And, if so, can I take back everything I just wrote?