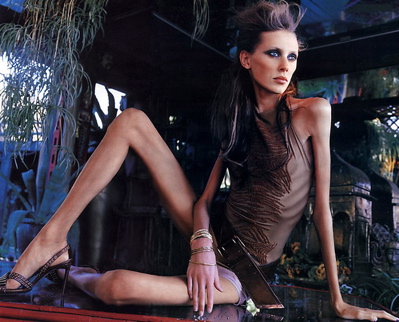 The following article has been written after much research and interviews with many models and agents in the industry. All the people interviewed have asked to be anonymous for privacy. As does the author.

As publisher I have taken the initiative to publish the following article because I believe there are some very serious questions that need to be asked of the modeling industry.

Having spent my formative years as a male model in Europe I can only say that what you will  read below is not too far from what really goes on, although even I am shocked because back in the early 1990’s/ late 80’s ‘modeling,’ seemed to be a profession, a risky one no doubt, but a profession nevertheless. What it has morphed into now certainly causes one to wonder what the industry is really all about. – Scallywag.

I wanted to find out what really goes on behind the scenes of this glamorous world and the facts that have come to light are quite shocking to say the least. Here are the ugly revelations:

The Life of a Male Model

They are able to have a much longer career but very few of them last more than two years in the industry. I found out that straight men in male modeling comprise of about 25% of the total. Many of them cannot cope with the crazy partying and attention from the female models etc. and burn out fast. One of the models I interviewed told us that not long ago as he was sitting at a bar, an elegant forty seven year old married woman approached him and after a couple of cocktails invited him to her room and offered him ten thousand dollars to have sex with her. He had never done anything like this, but realized that this was easy money and although he hasn’t done it since, he said he would have no hesitation if he was offered the chance again.

70% of all models turn to stripping and prostitution to make ends meet. An average stripper in a big city club can take home $500 to a $1000 in cash every night without any sex involved. However, if they want to make more money by selling their bodies the rewards are unlimited. Many gay male models will also sleep with women for money.

Drugs are everywhere in the industry and a lot of the models become very addicted and snort coke heavily on a regular basis to keep their partying lifestyles going. Many models party every night and a lot of them sleep with multiple partners. There seems to be very few monogamous relationships in the industry. This lifestyle takes it’s toll very fast and thus a large number of the models lose their looks quickly. Very few models save any money as many of them don’t come from affluent educated backgrounds. They seem unable to cope with the huge amounts of cash that come their way and end up blowing it as fast as they make it.

The Life of a Female Model