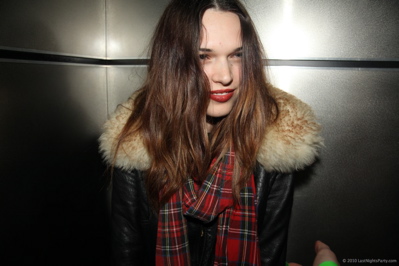 white vehicle in the center of the room. Sooo… THAT was what this was all about. The disappointing reality of the situation began to set in. Some car company, I am not even going to mention which one, because I don’t want to give them more press, got all the hip kids to come out to their event so they could “photograph” us and “videotape” us dancing around their new car. EWW, pathetic. I felt insulted. I came out to this party because I like Sarah Silverman (who doesn’t?) I like the parties that Paul throws… And I like the music that The Misshapes play. But what I don’t like is being USED by a multi-million dollar corporation to make their product look cool. If you want your new car to look cool… Why don’t you hire some actors or models and make a cool commercial? Oh wait, because that would actually cost your company money.

Instead, they got Patron to sponsor the event, and we were now officially the stars of their new campaign. How were they paying us, you may ask? In tequila. This company was treating us worse than hookers… At least hookers get paid in cash! Did they really think we were that dumb? Certainly I wasn’t. I wanted to leave, immediately. But it was raining… And it was only 10:50, too early to go anywhere else. Ugh, I was stuck.

I heard that there was a second level to Skylight West. I found the staircase around the corner and headed up. Fortunately, there was not another car on the second level. In the center of the room, there was a cluster of chairs. I sat down in one, and put my feet up on a very familiar looking table… But where did I know this table from? Oh My God… These were the same tables they had at Cain… And Cain just closed… Don’t even tell me that they had an “Everything Must Go/Going Out of Business Furniture Sale??”

I was beginning to lose all hope for the situation, when I heard my name being called from behind. I turned around… It was an old friend that I hadn’t seen in a while… Yay. He sat down next to me and instantaneously, a waiter appeared with a tray of cocktails… Double yay. We chatted as I constantly kept checking the time on my cell phone… 11:15, 11:45… As soon as the clock struck midnight, I wondered, was it too early to go to Avenue? No. I grabbed my coat, my friend, jumped in a taxi and headed over to Avenue.

The cream of the crop reunited there… Away from the photographers, the car tackily on display, and the 2nd hand furniture from a closed club… We were all pretty sloshed from all the free tequila, and finally hearing some good music provided by Harly, Cassie, Mike Nouveau & Todd… We danced the night away leaving the previous party in our dust. 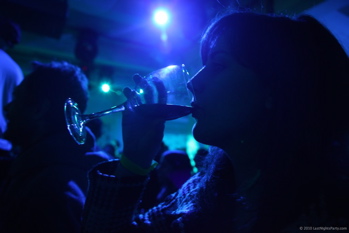