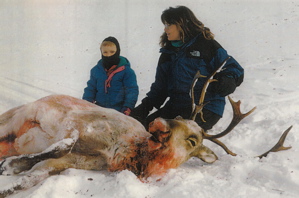 Who could blame Discovery Channel, it was a compelling idea- follow a photogenic bimbo with a cult following as she showed us which way Alaskan salmon liked to swim and where exactly those big Alaskan bears liked to take their dump and occasionally bake us an apple pie while single handily fighting off of one those grizzly bears. It was a premise which was bound to make lots of money for Discovery until it realized they would have more luck sitting in the bushes waiting for Bill Clinton and John McCain dropping by to serenade her.

Last week Discovery had its annual sales conference for ad buyers for all of its 13 networks. The presentation showcases all of their new shows across the different networks. That night the presentation was on Sarah Palin’s Alaska.

Our source says “the whole thing [was] comical.” Apparently the ad buyers were not impressed. This Discovery insider said, “When the promo was over, people (employees and buyers) were rolling their eyes, snickering, and even laughing. People were laughing and it’s not even a comedy. No one took it seriously.”

Shucks, can’t Discovery just tell the ad buyers that deep down the show is in fact a comedy, one of those deep down felt tragi- comedies where the viewer is supposed to work out for themselves whether they are supposed to laugh or cry.

This person was concerned that given the lack of interest from ad buyers that Discovery would have to dump the show to “a crappy time slot” to cut its losses. They added, “Bottom line everyone thought it was a new all time low for Discovery. My guess is the show is going to tank big time.”

A new low for Discovery? No on the contrary. We’re sure they were all as high as kites when they signed up Sarah and the poor girl was just tingling all over and the minute the $2 million was given to her she went out and spent all of it on a preppy house the furthest possible state away from Alaska.

….getting her to host a show about the natural beauty of Alaska is a bit like getting Jeffrey Dahmer to host a cooking show for the Food Network. Yes, there’s a big name attached, but is that the name you really want associated with your brand?

Or how about this, just because my ass is on fire and I tell you to jump off the cliff so you can get a taste of it on the way down is that always a good idea? It is if you don’t mind spending $2 million to learn some heart felt lessons.