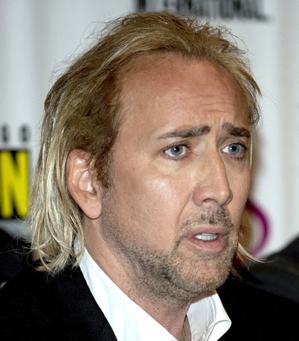 The fun to be had when a celeb pretends it’s just business as usual.

Golly Nick, don’t mind us-hope you don’t mind us looking at that lovely blonde mane of yours. What blonde mane you wonder, the one suddenly attached to your skull Nick. Oh that, I hardly thought anybody noticed? Of course not Nick, last week you were going bald and broke and today you look like the younger version of Mickey Rourke on a weekday bender. No we hardly noticed anything…

10 possible things that could have happened to Nick now that he looks like a ‘Florida truck stop hooker,’

1/ He dreamed he was a Hollywood 19 year old girl on the make and the next thing he knew God granted him his wish true.

2/ He accidentally fell into an oil well while cooking marshmallows, with the marshmallows permanently stuck to his head now.

3/ He had an impulse to see if anyone would notice anything different so he got the kids to do something ‘magical’ to his hair.

4/ He came across an old bottle of peroxide thinking it would cover the bald spot but in the end it covered everything.

5/ He got off the phone with Mickey Rourke and was moved to a sudden realization that he too could look like a middle age jack ass.

6/ The secret milkshake Nick was making suddenly seemed a good idea on top of his head than in his stomach.

7/ Nick suddenly realized that one day he would die and that he had to try once to figure out what it was like to live like Hulk Hogan.

8/ Nick was involved in a horrific car accident that sent him swerving into the local meringue studio and presto one thing led to another.

9/ Nick finally worked out that looking like a 20 year old version of Marlon Brando might help him get more acting jobs now that he squandered all his money.

10/ Nick still hasn’t noticed anything and as far as he is concerned he is forever the action hero you long ago bothered to paying attention to.