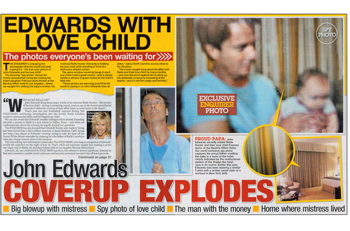 Manufactured apologies and doctored statements are coming to a TV station near you soon.

In the continuing surreal world of confessional TV where high profile public messes and public nuisances come together over hazelnut coffee, sun swept features and a slight dose of discomfort the latest drivel that will hit the public consciousness involves the ‘illicit’ affair between ex presidential candidate John Edwards and his squeeze Rielle Hunter. Of course what makes this affair a pretty mess rolling in from the horizon is the fact that Edwards carried on the affair while his wife lay dying from an incurable cancer and the fact that he used presidential money to buy her silence. With Oprah Winfrey winning over Diane Sawyer and Barbara Walters for the TV scoop the world is officially now in a holding pattern until the interview airs live in May.

“Rielle is super excited to have Oprah come into her home,” an insider  told The ENQUIRER exclusively.

“She’s excited about giving her account of how she met John, how the affair began and what’s in store for her future. Rielle also wants to clear the air about the GQ photos – she’s basically doing it to get the  truth out and tell her side of the story.”

Is anyone suspicious here? She’s excited to be telling the world how she became the quintessential home wrecker? And what’s this stuff about getting the truth out there? The only truth is that Rielle and Edwards intend to give this story more spin than a phalanx of seasoned tennis pros could give a puny tennis ball topspin.

Rielle has been in talks with ABC’s Barbara Walters and Diane Sawyer but thought Oprah was “more spiritual and would get her,” according to the insider.

Is that just another way of saying that Oprah agreed before hand to limit the number of potentially uncomfortable questions to ‘how did you two meet, what’s your favorite sundae and which movie makes you cry? In any event the world is flocking to this side of the pond because only Oprah can give a nation permission to weep violently…