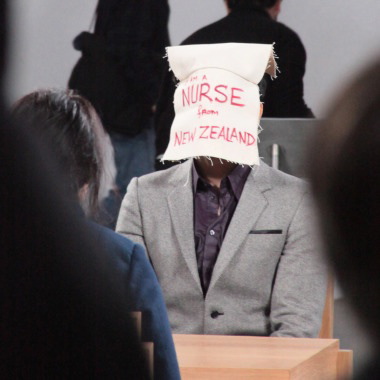 A meditation in the most sublime of performance art. An exquisite rendering if this editor may say so. That said, one can only reflect on the dynamic disposition attained by the battle of polar opposites as represented by Amir Baradan and Marina Abromovic. After all, silence can never exist without the extraneous noise that sometimes, nearly tries to eclipse it….”- Scallywag.

Amir Baradaran interestingly captured audiences at the Museum of Modern Art MOMA last week. He fearlessly challenged Marina Abramovic—“the grandmother of performance art(’s)” “The Artist is Present” heavily advertised and anticipated exhibition. For eight hours a day every week, she invites the public—individual patron to join her sitting, video-taped and in silence at the table. Not only did Baradaran go up to the table and sit, an intimidating feat to most, but he staged a four act staged piece exquisitely laden with dance, song, strong cultural references and an expressive play on objects of representation.

Act I- ‘Bodies & Wedding’; Act II- ‘Behind the Canvas’; Act III- ‘Other Trance’; Act IV- ‘Reflections’. See http://www.amirbaradaran.com/act-i/ for a precise summary of each act.

Act I: In the first act, Baradaran wore an identical red version of Abramovic’s long-sleeved navy fitted gown. The whole room gravitated toward the charismatic, as Baradaran proposed marriage: “I love your bodies of work… and I would love to be wedded to this body…. do you accept this marriage, here and now?” He spoke, Abramovic didn’t: “In my culture when the lady does not answer, ‘they’ say she is out making rose water.” Rosewater was a first clue into the whereabouts into the strange artist’s Persian origins. Ending his royal dance with a flail of his hands, hip shaking and bow of his head to his heart, Baradaran in red must have tempted the statuesque host to dance, move and talk; but as interesting as he was charming, Balkan Abramovic remained perfectly still.

II: Emerging for a second act, Baradaran– wearing three canvases over his head– sacrificed speech to charade; he was completely silent as he lifted each of the veils to reveal message. First “In/Out” then “a nurse from New Zealand” and finally “a non-resident alien,” Abramovic laughed audibly when he lifted the first veil, having recognized the random line taken from one of her interviews. The first and third messages signified border crossings—to his being an outsider.

A victim of being over-identified according to race, religion, nation or class, Baradaran took out an inkpad to fingerprint himself. Evoking the manner of detainee at a security checkpoint, Baradaran was disciplined in his motions, but never completely still. Perhaps Abramovic provided him with sense of purpose but instead of meeting her at the table, quietly and meditatively as was obliged of him, he contested her. Baradaran “poetically quarreled” with Abramovic.