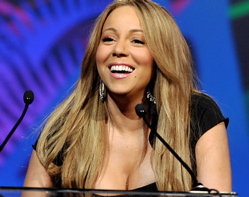 Mariah Carey recently had herself a very normal evening for a celebrity: an award show, some champagne and some time on stage. Unfortunately for her, she didn’t do it in that order. After winning Best Supporting Actress at the Palm Springs Film Festival, Carey teetered out, hugged, squealed and rambled on. She was drunk, yes. But she was adorable. And after the ceremony she went home, slept it off, and woke up to the sound of America putting another nail in the coffin of the Lovable Drunk.

Yes, alcoholism is a serious problem. 18.5 million Americans struggle with the disease, to say nothing of what their families go through. But humans have been drinking since 10,000 BC, and celebrities have been doing even before that point. There have always been and always shall be drunk celebrities. Why not embrace them?

Mariah Carey is very annoying for many reasons. Public drunkenness should not be one of them. In fact, I’d like to cross that off the list of things the media holds against its celebrities in 2010. America used to love drunks! Andre the Giant is reputed to have consumed 7,000 calories a day in booze, to say nothing of food. Marilyn Monroe was famously drunk for her last photo shoot, which adds a blurry sex appeal that Lindsay Lohan couldn’t dream of replicating.

This is to say nothing of the literary celebrities like Fitzgerald, Hemingway and Pound. Hemingway and Fitzgerald were arrested for public drunkenness together, for instance. There was a nobility to these people’s substance abuse: Hemingway wrote to Pound that “one of the best things about being a writer, is when you’re having the wildest time, when you’re completely on the bum, you’re still working, or at least you should be.” Mariah Carey seemed like more of a rock star up on that stage than she has in years. She was absolutely working.

Besides, the drunk is someone that the youth of America should relate to, not condemn. Every college student in the developed world has done things ten times more humiliating than Mariah Carey, or even Kanye West. Everyone has an evening in their dimmest memories they’d rather was completely dark. If I can forgive my roommate for vomiting in our sink three times in one semester, can’t we, as a nation, forgive Mariah for a bumbling speech? And even Kanye for his ill-conceived defense of his friend? Three times in one semester!

In a decade in which we watched beautiful after beautiful person die from prescription pills, and we waited with bated breath for Amy Winehouse to smoke her last dime of crack, shouldn’t we be embracing the drinkers? Isn’t it better to be tipsy on champagne than blindsided by a pharmaceutical cocktail?