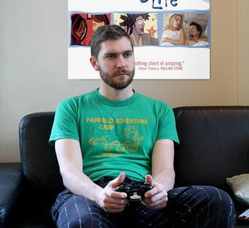 Adventures and mysteries in suburban Boston.

Out of Boston comes the compelling case of Kyle Fisher’s new roommate- Tom Alford. Although Tom has been living with Kyle for over 3 months Kyle has yet to work out what Tom does with his time, whether he really has a job and why Tom is always sleep when he is leaving the house for work late morning and why Tom is in fact also asleep when Kyle later returns that evening. Does this sound like a room mate you’ve ever had?

“I’m not sure exactly what he does, but I think he said he works at this place where he makes these calls to people for these events,” said Fisher, who added that, from what he can tell, Alford works anywhere from 10 to 60 hours a week. “It sounded like a Monday-to-Friday, 9-to-5 kind of thing to me. But just this past Wednesday, I got home a little early and Tom was asleep in bed.”

Perhaps Tom was just ill that day? Or maybe not? Continues the report…

“That means he either got home before I did and immediately went to bed, or he didn’t go to work at all,” Fisher continued. “Last week wasn’t a holiday and he wasn’t sick, so maybe Tom doesn’t work on Wednesdays? Does that even make sense?”

Let’s see if we can get to the bottom of this?

Over the past few months Fisher has developed multiple theories about Alford’s work schedule. Initially, the 26-year-old was convinced that Alford had switched his hours and was working from 12 p.m. to 8 p.m., while the next week it appeared as though Alford had begun working only three days a week. During the month of October, Alford reportedly left the apartment several times at 10 p.m. for a “work thing,” causing Fisher to briefly consider that his company had implemented some sort of night shift.

Night shift? Maybe. Or maybe not…

“There have been several instances when I’ve gotten up at 3:30 [a.m.] to get a drink of water and he’s in the kitchen cooking pasta,” Fisher said. “Honestly, the entire thing is a complete toss-up at this point.”

Ok, but Tom has money have money for the rent?

“He gets his rent in on time, so I guess I shouldn’t care,” said Fisher, adding that there is no indication that Alford’s parents are helping him financially. “Maybe he works at a place where they don’t really monitor whether he shows up or not. Or maybe he can work from home sometimes. Or maybe he’s been working every day including weekends this entire time.”

“Or maybe he’s some lying weirdo,” Fisher continued, but was interrupted by Alford, who emerged from his room, walked to the front door, and exited the apartment.

The moral of the story: Don’t try too hard to understand room mates, especially ones that still manage to pay the rent on time…