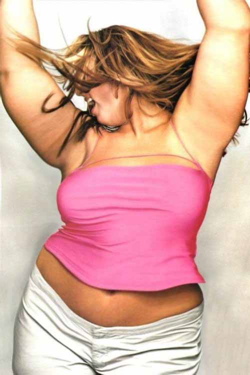 Being fat doesn’t pay in America.

Oh the irony. In a country which claims one of the highest rates of obesity one website-beautifulpeople.com has decided to take action by culling 5000 members from its roles after members decided that they weren’t willing to tolerate those members who had managed to put on a few pounds over the Christmas holidays.

The international site BeautifulPeople.com threw out members after they posted photos “revealing that they have let themselves go,” according to a company statement.

“As a business, we mourn the loss of any member, but the fact remains that our members demand the high standard of beauty be upheld,” said Robert Hintze, founder of BeautifulPeople.com. “Letting fatties roam the site is a direct threat to our business model and the very concept for which BeautifulPeople.com was founded.”

Of course in a country like America- where most of the constituents are morbidly obese- it only makes sense to allow fit and healthy people to ‘roam the site,’ because as we can all attest only fit and svelte people know how to love and are deserving of love as most fat people are not to be tolerated and allowed to participate in the action game of dating. Continues the article:

The site describes itself as an “elite online club, where every member works the door” — that is, users can join only after enough members vote them “beautiful” during the 48 hours after their profile is uploaded.

And apparently, enough beautiful people were angry that some members had enjoyed a bit too many treats during the holiday season.

This kind of reminds us of those night clubs where gangly doormen stand guard before letting you in- paying attention to your cool factor, your cheek bones, your cache and of course your waist line. One wonders what this means? Will skinny and svelte Americans be forced to call for a separate state, a new constitution, a new revolution where only they will be allowed to exist and to happily go on and make skinny babies?

Maintaining those standards is what the site is about, Hodge said, and that’s why people were expelled.

“Every year we see that some of our members from Western cultures eat and drink to excess over the holidays, and clearly their looks suffer,” he said in a statement. “The U.S.A. has been grossly over-indulging since Thanksgiving. It’s no wonder that so many members have been expelled from the network. We hope they will be back after shedding the festive pounds.”

What do we think? Thanks for the advice Greg, but we don’t think we’ll be coming back or anywhere near your site anytime soon. Fat people of America – ‘let’s unite!’