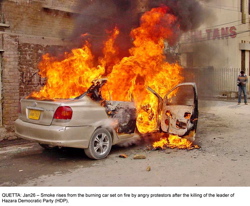 When the yuppies are destroying a good thing.

Out of the Guardian comes a very interesting story of a society at war with itself or rather with a certain contingent that has slowly overtaken the landscape. In many other parts of the world (okay let’s even point out NYC) these changes would be accepted, tolerated and perversely adopted by the same group who has so much to lose. Not so in Berlin. Reports the Guardian:

In Berlin, a growing band of leftwing car arsonists have become the face of an increasingly vociferous campaign against the gentrification of the German capital. In 2009, 216 mostly luxury cars were torched on the streets of the city, compared with 135 the previous year.

A one off event? Not at all. A mainstay actually…

So common is the practice that spotting the attacks has become a popular pastime, spawning an obscure website, “Burning Cars”, where contributors track the models that have been targeted. Brennende-autos.de lists the six most recent cars as two Mercedes – the most popular target – a Jeep, Range Rover, Mitsubishi and a rather more modest Ford, which was burned almost beyond recognition on New Year’s Day on Hermannstrasse in the former West Berlin district of Kreuzberg. The traditional home of leftwing activism is where most have taken place.

‘Burning Cars?’ When was the last time we all played that game with impunity in America? 1969? 1971? Continues the report which explores local disillusionment with the moneyed class (whom we in America viciously try to assimilate instead…)

In a letter to a leftwing publication, the group said it carried out the attacks in protest at the post-Berlin Wall “transformation of poorer districts”, such as Neukölln , Kreuzberg and Mitte where it said “established residents”, were being squeezed out by “acute gentrification”.

Old flats and warehouses turned into luxury loft apartments have driven up rents and house prices beyond most residents’ means.

Does this sound like anything that’s happening around your neck of the woods folks?

Anger felt by those affected by the influx of the “new bourgeoisie” extends to the disappearance of open spaces and a growing indignation among communities that they are not being consulted. The protest has recently spread to the disused runways of Tempelhof airport, which was closed two years ago. Authorities want to use to land for luxury apartments. Opponents would like it to be developed as a park.

The report goes on to state that perversely the things that drive the genteel class are the things that are now being trampled and taken away and that soon all one can do is watch and remember the glory days as long as one doesn’t mind to resorting the occasional car fire bomb which interestingly enough local authorities have been slow in combatting (we wonder why?- maybe they are the very residents who can no longer afford the once working class neighborhood that has now suddenly become chicky mickey…).

In any event we’re sure you can’t wait to arrive in Berlin and pay for that 4 euro coffee that until only recently only cost you 2. Can you think of where that reminds you of? We can…