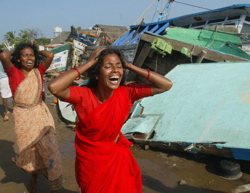 Putting the world into perspective.

The first thing we thought when the news broke about the massive earthquake measuring 7.0 on the richter scale was why is it always the most unfortunate people of the world who always keep having their guts ripped out? Well we still don’t know the answer to that but a general reading of events and observations may help put us westerners into a modicum of perspective if not for our own sanity but for those spared their lives and trying to understand which way is up or down.

PORT-AU-PRINCE, Haiti — Haitians piled bodies along the devastated streets of their capital Wednesday after a powerful earthquake flattened the president’s palace, the cathedral, hospitals, schools, the main prison and whole neighborhoods. Officials feared thousands — perhaps more than 100,000 — may have perished but there was no firm count.

Death was everywhere in Port-au-Prince. Bodies of tiny children were piled next to schools. Corpses of women lay on the street with stunned expressions frozen on their faces as flies began to gather. Bodies of men were covered with plastic tarps or cotton sheets.

Not a pretty sight no doubt and how can we possibly here in the Western world begin to digest the grief?

A small contingent of U.S. ground troops could be on their way soon, although it was unclear whether they would be used for security operations or humanitarian efforts. Gen. Douglas Fraser, commander of the U.S. Southern Command, said roughly 2,000 Marines as part of an expeditionary unit might be deployed aboard a large-deck amphibious ship. Fraser said the ship could provide medical help.

Other nations — from Iceland to Venezuela — said they would start sending in aid workers and rescue teams.

At least this right? At least the world has come together. What else can one do? Can we really walk away now?

The prominent died along with the poor: the body of Archbishop Joseph Serge Miot, 63, was found in the ruins of his office, said the Rev. Pierre Le Beller of the Saint Jacques Missionary Center in Landivisiau, France. 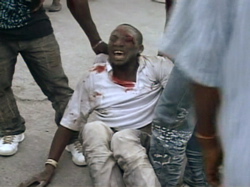 Did death ever know any distinction? What’s the old saying- we are all equal in death…

Haiti’s quake refugees likely will face an increased risk of dengue fever, malaria and measles — problems that plagued the impoverished country before, said Kimberley Shoaf, associate director of the UCLA Center for Public Health and Disasters.

Some of the biggest immediate health threats include respiratory disease from inhaling dust from collapsed buildings and diarrhea from drinking contaminated water.

Most Haitians are desperately poor, and after years of political instability the country has no real construction standards. In November 2008, following the collapse of a school in Petionville, the mayor of Port-au-Prince estimated about 60 percent of buildings were shoddily built and unsafe normally.

What is the world to do and really what can we all do? Think you’re having a bad day? Let the tears flow because today they are for sale.