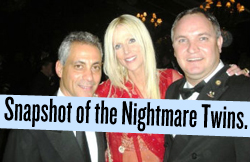 Dilemmas and heartbreak in Washington.

After much head-scratching and conferring, we have arrived at the conclusion that the definition of party crashing is to show up at a party without an invitation.

In the light of this epiphany, we are beginning to wonder which dictionary Tareq and Michaele Salahi had been reading before appearing on the Today show saying they “did not party crash the White House.”

There seems to have been some confusion over an exchange of emails between the Salahis and Michele Jones, a senior Pentagon official, from which the couple seem to have got the impression that they were invited, but Jones has denied that she ever “said or implied” she would get the couple in, reports Fox News.

“I specifically stated that they did not have tickets and in fact that I did not have the authority to authorize attendance, admittance or access to any part of the evening’s activities,” Jones said. “Even though I informed them of this, they still decided to come.”

One is inclined to believe her, since it would presumably be a lot easier on the White House right now if they could get everyone believing the couple was invited to attend all along, rather than that they somehow got past every security measure put in place to stop them doing so.

We are also urged to believe that the experience has, of course, been “the most devastating thing that’s ever happened” to the Salahis, who are apparently “greatly saddened by all the circumstances that have, you know, been involved in portraying [us] as party crashers.”

This would all be slightly more convincing, though, if we didn’t have quite so much reason to suspect that the pair are just your average common or garden publicity whores.

“Despite their claims of innocence, Michaele Salahi is said to be trying to land a part on an upcoming Bravo reality show, “The Real Housewives of D.C.” And the Salahis’ antics aren’t the first, according to MyFoxDC.com, which reported that the two crashed a Congressional Black Caucus Foundation dinner on Sept. 26.”

“I don’t want to say it’s like a kid getting his hand caught in the cookie jar, but in essence that’s pretty much what it was,” Lance Jones, a communications official with the foundation told Fox. “Upon confirming that they did not belong, we escorted them out.”

We are told that an explanation is forthcoming, in the light of which Tareq Salahi is “certain we will be completely exonerated,” but one has to wonder why such an explanation could not just be given now. Possibly because they need time to invent one?