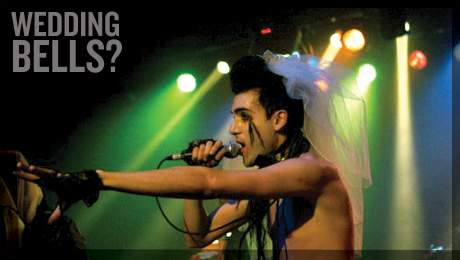 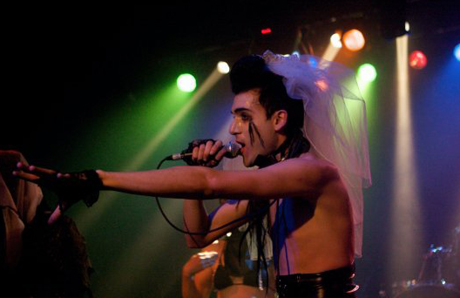 The guy on the stage (at Don Hills) is not your average performer, in fact he is a one of a kind performer and in short he is simply brilliant. He arrives on stage as if in a death procession, busting brilliantly colored balloons before we make out the contours of a finely featured face. Yes he is beautiful, but that is besides the point. What is more strange and alluring is the way he goes about exercising his beauty. Without knowing it we have arrived at a glam gothic awkward pop rendition where anything goes and as much as you want to look the other way you don’t dare for fear of missing the phantasm exploding on stage. In short it is Kayvon Zand expressing himself the only way he knows how- with mischief, pathos, and a comely sense of humor that even Oscar Wilde would find beguiling…

As he performs we are drawn to simulated sex routines, the visage of black rubber dolls being straddled and the sly grin of a very rude boy who knows he may be offending you but is secretly getting you off.

At one stage a blonde leather vixen girl half naked, half demonic and halfway to heaven with her nipples clad in black masking tape gets on stage. It’s this song called “Bitch Die,” a song about women’s overt power over men that gets the audience really wound up. Wound up because on some amphoral level we have felt these very emotions despite our deepest desire and feeling for our partners. Kayvon Zand is inciting you to think and feel deep inside you and by this stage you can’t help but sway along with Zand and his motley crew.

Fortunate to catch up to Zand after the show I get to ask him a series of questions that confirm my suspicions- that this man before us is destined to a long journey in the world of entertainment.

SCV: How would you describe yourself ?

KZ: If Marilyn Manson were to impregnate Elvis Presley I would be their love child.

SCV: When did you first start playing music?

KZ: Before I could walk I was playing the piano and then eventually the violin.

SCV: What inspires your music?

KZ: Self expression, vulnerability, darkness, lightness, romanticism, hope  and the lack of it.

KZ: I grew up in the South were people tend to be closed minded and repressed. I wanted to challenge ideas and come to my own self expression.

SCV: What did this involve?

KZ: As a young boy I would cut my sister’s Barbie doll’s head off and try to have sex with them.

SCV: How did that work out?

KZ: It got frustrating after a while. 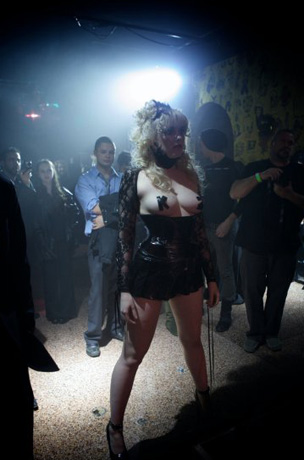