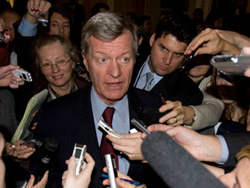 Here’s an interesting idea. You’re a politician with a big stick, who because of his charm, respect and the size of his stick (pun intended) is able to ever so casually nominate his lover as the newest Attorney General in Montana. Don’t believe it? It seems it’s just another day in the life of the chairman of the finance committee- Max Baucus.
Reports Politico:
Max Baucus, chairman of the powerful Senate Finance Committee, recommended that the White House nominate his girlfriend as a U.S. attorney in Montana, his office announced late Friday night.
Interesting, that his office was suddenly compelled to announce such intimate matters…one does have to wonder what inspired such revelations. Shall we read on?
Earlier this year, Baucus recommended that the White House consider Melodee Hanes and two other names for the U.S. attorney post – at the same time that the senator was carrying on a romantic relationship with Hanes, who had been his state director.
Aha, a sticky situation. But hey, if I’m the big man at the senate finance committee surely I can wield my stick to get what I want? Let’s see if we can….
And despite Baucus’ office contention that nothing was improper about his recommendation, it will almost certainly spark calls for Ethics Committee inquiries given the appearance that Baucus was assisting his girlfriend secure a top spot as a prosecutor in the Obama administration. To combat that criticism, Baucus’ office released Hanes’ lengthy resume Friday night, portraying her as a highly educated and well-versed attorney in prosecutorial issues – as well as detailing a long list of community service activities.
Yes, a wonderful resume no doubt in and around the bedroom.
George Orwell – Power corrupts, absolute power corrupts completely. – source  Animal Farm- 1945.