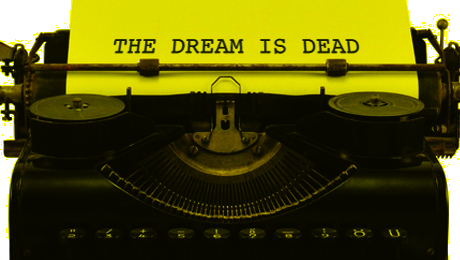 The screenwriter is the lowest primordial goo of the Hollywood food chain. It’s actually a hell realm reserved for karmically challenged individuals who clearly did terrible things in their past lives. Anyone attempting to become a “screen writer” in Los Angeles is either clinically insane or exceptionally deluded.

This is not as much of an article as it is a cautionary tale— or more appropriately a compassionate warning— for anyone considering moving to Hollywood to begin a career in this field. There was a time when writers were partial gods, treated like temporary royalty with pseudo respect. However those days were swiftly obliterated after the last writers strike staged by the WGA in 2007. Now known as the greatest mass career suicide in Hollywood history, thousands of writers publically cut their throats in their impotent gilded attempt to increase their participation in both DVD and digital residual rights. They stood strong, marched long hours with one time academy award winning screenwriters, Matt Damon and Ben Affleck at the helm, carrying signs and chanting slogans for the poor writer who keeps getting screwed by big studded corporate dildos.

As the death march continued, like eager lemmings fighting each other to get off the cliff, reality TV took over 80% of everything on the television. Old crappy scripts flew off the shelves of every studio and into production, and David Letterman and the rest of the talk show clowns got a really big paid vacation. The holocaust of the scripted writer was complete. Now almost three years later, the writer has reached a new subterranean low of existence. Thousands of writers who could no longer afford to chase their tainted dreams fled the city and are now either living with their parents, writing obituaries or sucking strangers in truck stops to pay for their antidepressants.

William Goldman, the Princeton educated, academy award winning screenwriter who wrote everything from “Butch Cassidy and the Sundance Kid” to “Titantic” has publically written about the horrendous treatment he experienced from generations of studio executives that abused and molested him over the decades. Even at the highest level of the evolution of the “screenwriter, with academy awards and a seven figure income, which Willaim Goldman uneasily achieved, he was still shit on consistently by even the lowest of studio scum. In a sense, William was King of the literary shitheads for many years, and never treated better then a glorified ape.