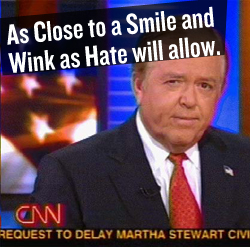 Being hated in return.

Last night’s departure of Lou Dobbs from CNN marks the end of a 30 year career as well as a media station giving weight to a madman with ulterior motives. It’s one thing to report news and address social concerns, but it’s another thing to inflame members of society simply for the fact that they are different from you: a ridiculous fat white man.

the talk show host has stirred up xenophobic, anti-immigrant hysteria and promoted an array of right-wing talking points, giving lie to CNN’s reputation for impartiality as well as comically belying his own claims of “independence.”

Dobbs is no stranger to contention and provocation has also been a valuable ally of right wing freaks- the ones that you typically ignore until you one day find out that they are in political office (try George W. Bush and Dick Cheney).

Dobbs has also stated his support for extremist groups and individuals like the Minute Men, a militia group that patrols the border, and Arizona Sheriff Joe Arpaio, who marched inmates from his infamous tent prisons through the streets in pink underwear. Dobbs has ties to the hard-line anti-immigration group Federation for American Immigration Reform (FAIR); the talk show host broadcast one of his radio shows from a FAIR event, and the organization, which has been designated a hate group by the Southern Poverty Law Center, has given Dobbs an award for in their words, “his continued efforts in leading the immigration reform movement.”

Of course, the bigger question is why CNN held onto Dobbs for so long. Could it be that they are not so impartial as they like to claim? It also occurs to us that no media station can be truly impartial, as every interpretation of news events requires a filtering mechanism which suggests the editorial stance.

Regardless, Lou Dobbs, hatemonger, has gone, but frankly, we wouldn’t be surprised if CNN were to pick up another madman.  This time, though, it would probably a left wing mad man (after all they are in the business of entertaining) and Lou Dobbs will end up showing his puffy, pink face at a home probably a little more appropriate for him- FOX. We just hope Bill O’Reilly doesn’t get jealous that he too now has to share the title of hysteria man and douche bag.

Sometimes being a big, fat, racist, white man in America isn’t all its cracked up to be.