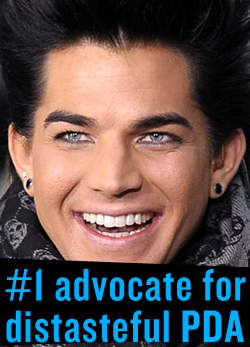 The most recent controversy that seems to have sparked a media frenzy is Adam Lambert’s performance at the 2009 American Music Awards. His raunchy performance, including simulating oral sex with a male dancer and making out with a male keyboardist, received numerous complaints and even caused a cancellation in his Good Morning America appearance.

In defense, Lambert stated, “It’s a double whammy — I think it’s because I’m a gay male, and I think people haven’t seen it before.” Really America? Have you not watched Brokeback Mountain? We have seen countless performances where female singers gyrate and shake what their mama has given them, and we haven’t complained. We’ve also seen male singers grinding on female dancers, even though it has nada to do with the song. We’ve been Britney Spears and Madonna make out, we’ve seen Lady Gaga smash bottles, we’ve seen Miley Cyrus dancing in a way that it looked like she was having sex with her dancer. What makes this performance so different?

Lambert also said that he did “get carried away” and “I do see how people got offended, and that was not my intention. My intention was to interpret the lyrics of my song and have a good time with it.” Which again is true, after all what does a bad romance have to do with smashing down glass to get to a window (Lady Gaga?) or partying in the USA have to do with dancing on a pole? (Miley Cyrus?)— well ok, maybe partying in America has a little bit to do with poles. Anyway, how is this performance so different from watching a television show and watching a romance scene with two gay men? What was it about this particular performance that ruffled so many feathers? Even CBS’ The Early Show blurred out an image of Lambert kissing his keyboardist while showing an un-censored image of Madonna and Britney Spears at the 2003 VMA’s. Is this because Lambert is actually a gay male and Madonna and Britney Spears are straight? What is it?

CBS later stated, “We gave this some real thought. The Madonna image is very familiar and has appeared countless times including many times on morning television. The Adam Lambert image is a subject of great current controversy, has not been nearly as widely disseminated, and for all we know, may still lead to legal consequences.” Sounds like they’re trying to cover their asses and try not to be portrayed as sexist, but come on. Can and will people actually press charges because of a performance? Is this issue THAT serious and horrific?

I guess it all boils down to the fact that America, no matter how open and “pro-gay” it poses to be, we still aren’t ready to accept to see two men making out on stage. It seems as though that still has to stay inside the bedroom until the day America becomes more gay male friendly — if that time ever comes.