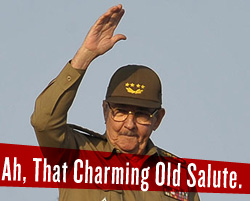 Here’s a trick question. Because Fidel Castro, Cuba’s longest reigning strongman, effectively moved aside for his brother Raul, what do you think has happened regarding human rights violations? If you believe they worsened, we’d like to award you an award for clairvoyance and perceptiveness. Since Fidel Castro left the political stage, life in Cuba has gotten a whole lot tougher and uglier (never mind the promises and hopes of redemption being peddled by US congress looking for get rich and fat schemes at Cuba’s expense).

How ugly, you wonder? Well, according to the UK’s Guardian, it goes something like this:

The government has extended use of an Orwellian law that allows the state to punish people before they commit a crime on suspicion they may do so. A tactic designed to cow actual and potential opponents, it said.

Wait a second, doesn’t this remind you of a country somewhere on this earth that pretty much does the same thing? A country very close to Cuba, sitting somewhere between Russia and the Atlantic ocean?

Since taking over from Fidel in July 2006 Raúl has kept up repression and kept scores of political prisoners locked up, it said. “Raúl Castro’s government has used draconian laws and sham trials to incarcerate scores more who have dared to exercise their fundamental freedoms,” said the report.

Interesting, because since taking office, a certain president has maintained the same rudimentary conditions and confinements that his predecessor enacted. Which president you wonder? The same president of that very same country between Russia (the bogeyman) and the Atlantic ocean.

The EU and Canada preached human rights but failed to pressure Havana for compliance, it added. “Worse still, Latin American governments across the political spectrum have been reluctant to criticise Cuba, and in some cases have openly embraced the Castro government. [This] silence … perpetuates a climate of impunity that allows repression to continue.”

Notice an absence of political stance from a certain country sitting between Russia and the Atlantic Ocean?

In fact, according to the report, he tightened repression with greater use of a provision in the criminal code which allows people to be convicted for “dangerousness”, defined as behaviour which contradicts socialist norms.

“The most Orwellian of Cuba’s laws, it captures the essence of the Cuban government’s repressive mindset, which views anyone who acts out of step with the government as a potential threat and thus worthy of punishment,” the report said. It documented more than 40 cases in which individuals were jailed for “dangerousness”, including such things as handing out copies of the Universal Declaration of Human Rights, staging rallies, writing articles critical of the government, and trying to organise independent unions.”

Human rights violations always make the world go around, especially in those nations sitting specifically between Russia and the Atlantic ocean.